Thoughts of a former whale hunter in the Faroe Islands

The following was written by a Faroese who formerly participated in the pilot whale hunts known as the “grind”. It is his response to misinformation on the subject being posted widely on social media.

He speaks in his own words and without influence. The content is unfiltered and the opinions and views expressed herein are his own. Having been attacked and threatened on multiple occasions for his views, only his first name has been employed.

As an independent anti-whaling advocate, Sasha Abdolmajid wishes to see the end of the pilot whale hunts in the Faroe Islands – but he is not condemning the Faroese. He wants Jàkup, a Faroese, to be heard outside the islands. Abdolmajid believes the insights and opinions of the “other side” should be heard in order to foster understanding and dialogue. 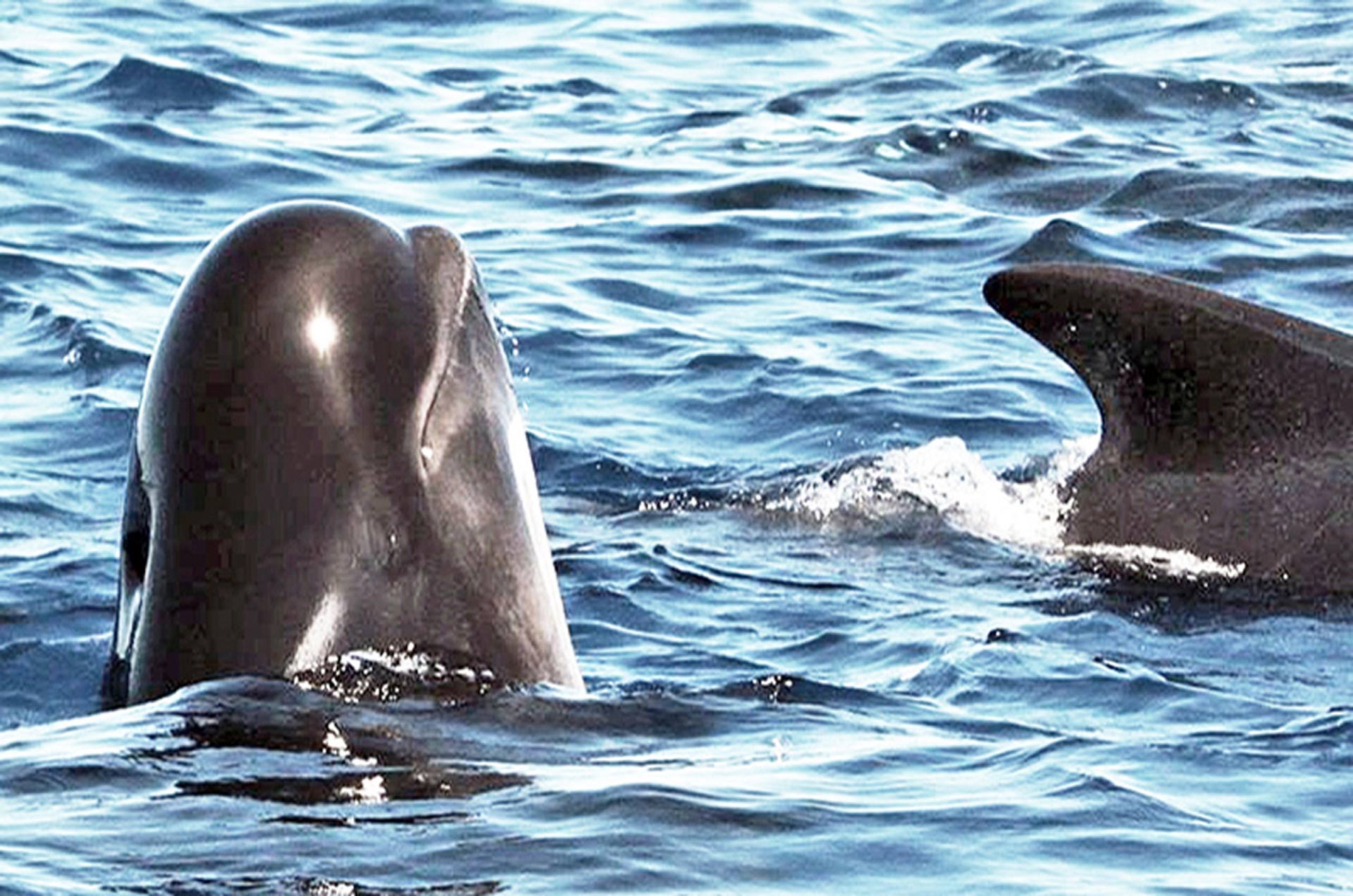 M y name is Jàkup, I’m 34 years old, and I’m an ex whale hunter. I stopped whaling five years ago because of the contamination and toxicity issues. I listened to the warnings of Pál Weihe, Chief Physician at the Department of Public Health, and no longer consume whale meat.

I have seen whaling all my life. When I was younger, I saw my father on the beach taking part in the whaling, and I knew that someday it would be me. My father was never a fanatical whaler, but had a very calm relationship to it. He only joined in if we were running out of whale meat. I remember me asking him once, if we were going to a grind, but he answered no, we have enough.

As I grew older, I started to go to the grinds myself, and I think that my father actually liked this since he could stay at home and still get the meat. Sometimes I would have enough, but still go to a grind and just give the meat to others. For instance my wife’s grandfather, who had no chance of going himself, but also others who I knew had no whale meat. I liked giving others free food.

The first time that I cut a whale myself, I asked an old man if he could guide me through it. He was there by my side the whole time and every single cut was perfect, and no, we don’t chop and slice them, it’s one cut only. 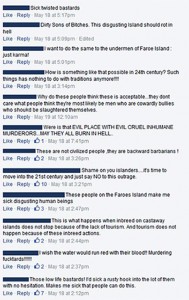 A sample of the many comments on the ‘Grindstop 2014’ Facebook page about the grind, which illustrate the hatred and aggression shown towards Faroese people. Screenshot – http://on.fb.me/XVvI4Q

I’m often stunned by the comments that we get from people in other nations who attack us because of whaling. Comments like “I wish a tsunami would sweep over those islands”, “I hope they all die from eating toxic meat”, “Nuke those bastards” and “Karma will get you” are very common. We have been doing this for 1200 years now, exactly when will karma get us?

The comments about nukes and tsunamis are always accepted on the Facebook pages of Sea Shepherd, but if a person is trying to point out the half -truths or direct lies on those pages, their comments are simply deleted and they are blocked.

This of course brings me to the conclusion that they are not trying to tell people the truth, they are simply making people hate, nothing else. They need the hatred so that people will keep on wanting to fight us because this raises money.

When we kill about 800 whales per year on average, how are we killing the oceans? Pollution is the big killer, so why not fight pollution? It’s simple, bloody pictures and dramatic twisted lies give a stronger reaction and secure donations.

I respect people who fight for animal rights, but when they use any dirty trick in the book and only focus on the whales, then I simply cannot take them seriously or respect them. To me, it should be about animal welfare, not just whale welfare.

I have read that during a grind we grab the nearest household tool and just start hitting the whales, that we are drunk, it’s a festival, it’s a test of manhood, that the meat is left to rot, that we serve poisoned food to our children (make up your minds, do we eat it or leave it to rot?) and so on.

I have tried telling people that this is all made up by certain organisations, some listen and actually apologise for jumping to conclusions, but others tell me that I’m a liar, because they have read that it’s all for fun, a blood sport etc. Well, I could write some nasty stuff about them as well, but does it automatically become the truth? No, not even close!

At the moment Pamela Anderson is on the Faroe Islands to fight the grind. My thoughts are, why doesn’t she stop the whaling in her own country before throwing stones at us, especially since they kill more than we do? We kill pilot whales which are not on the endangered list, but bowheads and beluga are, and they are hunted in the US and Canada, as well as narwhal.

Left image: Bowhead whale caught in Igloolik, Nunavut. Photo: Ansgar Walk / Right image: A Beluga whale is flensed for its Maktaaq which is a source of vitamin C in the diet of some Inuit. Photo: Polargeo – http://bit.ly/1pmtfKQ

People tend to forget that, or maybe they don’t know about it. Some even accept it, although they are anti-whaling, because it’s done by the Inuit who are said to be natives. Why are we Faroese not natives? We are the only people who have lived here on these islands, are we not natives? Or can’t I be native simply because I’m white? All of these are just excuses, all in all, the US and Canada kill whales too!

Sea Shepherd claims to be law-abiding, but since when did sinking ships become legal? When did destroying other people’s property become legal? They always refer to the laws of EU, but still they follow their leader Paul Watson, who is a fugitive on the run from the same EU, how contradictory is that?

To be honest, the more dirty campaigns are run, the more I want to go back to whaling sometimes. It simply pisses me off. All meat has been alive at some point, so don’t tell me that whaling is wrong while stuffing yourself with a burger. If you’re vegan, then I fully support you.

There are good people here who are fighting the grind, Faroese people. Get to know them, learn the facts, the real facts, and support them. Find out how to help, listen and understand what you’re dealing with before taking action.

Name calling and hatred has never saved a whale – and that has been tried since the 80’s with no success at all. Change the tactic. We have had one murder in 23 years, how many nations can say that? We are not barbarians, not psychos, our children will not become psycho killers – like I said, one murder in 23 years. If you want to stop us killing whales, stop making us your enemies.

This article is also available in French and Japanese.