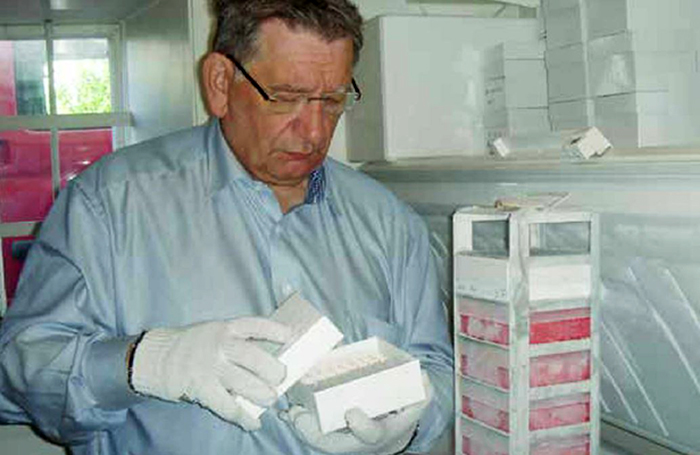 The following is a partial and rough translation of an article that appeared in a Faroese magazine in September 2013. As this is a translation of a translation, the text should not be quoted anywhere as a primary source. Helene Hesselager O’Barry. 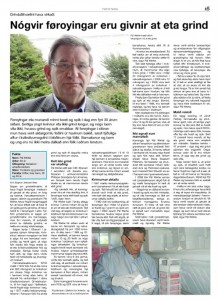 A ccording to Dr. Pál Weihe, who is chief physician at the Department of Occupational and Public Health in the Faroese Hospital System, pilot whale is no longer fit for human consumption. The Faroese people eat considerably less pilot whale than they did 30 years ago. Young women in particular refrain from eating pilot whale, and many Faroese children don’t know what pilot whale tastes like.

The fact that the Faroese have rejected the traditional diet of pilot whale is reflected in research conducted to determine the concentration of mercury in their blood: The (mercury) contamination of pregnant women, children and young people no longer exceeds what one would find in other countries.

The story behind the recommendations that have changed the dietary habits of the Faroese people is long and chaotic. The main character is medical doctor and researcher Pál Weihe who has been criticized for daring to say anything negative about the traditional pilot whale hunt, which has kept the Faroese alive for centuries.

In the mid-80s, Weihe worked together with Philippe Grandjean who is Professor of Environmental Medicine. Their aim was to investigate if Faroese children had been harmed by their mothers´ consumption of pilot whale. Weihe did not envision that the research would show any harmful effects, as the Faroese people have been eating pilot whale throughout thousands of years.

Blood tests were conducted on women from Leirvík. The women were between 20 and 50 years old. The concentration of mercury in their blood was much higher than that of people of other nations. Weihe then began testing samples of hair as well as umbilical cord blood (often called core blood) of more than 1000 women who gave birth in 1986 and 1987. He concluded that the children had between 10 and 20 percent more mercury in their blood compared to newborns of other countries.

The amount of mercury was closely related to how much pilot whale the mothers had consumed. When the children were 6 years old, they were thoroughly examined. As it turned out, there was a connection between the amount of mercury found in the core blood and the children’s development in several different areas. Among the areas mentioned are memory, language and alertness. The concentrations of PCB and DDT in the core blood were found to be 5-10 times higher than those found in other European countries. These toxins take longer to break down than mercury, and there is a suspicion that they may affect a person´s central nerve system and sperm quality.

According to dietary recommendations issued in 1997, pregnant women should not consume pilot whale meat and blubber. Not everyone was happy about the warning against consumption, but it soon became apparent that the women adhered to the guidelines.

A 1982 study revealed that a Faroese person would consume an average of 12 grams of pilot whale meat and 7 grams of whale blubber a day. In 2000, Weihe once again asked pregnant women about their pilot whale intake. It turned out that they only consumed one tenth of what a Faroese person, including those who were pregnant, would have consumed 18 years ago. 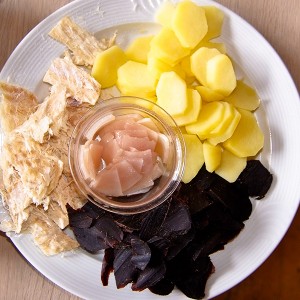 According to Weihe, the women of the Faroe Islands are unique in that they take the health risks seriously in order to safeguard future generations. The research conducted on core blood showed that mothers of the Faroe Islands eat less pilot whale. In 1986, about 24 micrograms of mercury was found in the core blood. In 2000 that number was reduced to 12 micrograms. In 2009 that number was reduced to 4 micrograms, which is about the same as what is found in countries where the population does not consume contaminated seafood.

Most Faroese children today do not eat pilot whale meat and blubber. The children who were born in 1986 receive regular checkups, and they hardly have any remaining mercury in their blood. But the harmful effects from the contamination that they were exposed to during their mothers´ pregnancy have not disappeared. The studies were conducted when the children were 14 and 23 years old. They show that the children’s central nerve system is still negatively affected by the toxins.

Research conducted by Weihe and other international researchers have revealed that several illnesses and incidents of health damage can be linked to pilot whale consumption. Maria Skaalum Petersen, who has a PhD in Pharmaceutical Sciences, says there is a connection between the toxins and Parkinson´s disease. She goes on to say that there are more cases of this disease in the Faroe Islands than in other neighboring countries. In 2008 Weihe, together with the Chief Medical Officer of the Faroe Islands, recommended that pilot whale is no longer used for human consumption. “The amount of toxins found in pilot whales has not decreased, and we still don’t know much about the long-term damage caused by biological toxins. This is why we found it right to warn that pilot whale is not fit for human consumption,” says Weihe.

The protests against these recommendations have been severe at times, and Weihe has been accused of being a traitor. It has been said that he is in fact a messenger boy to extreme animal rights organizations, and some have cast doubt on the credibility of his research. There is no doubt, however, that most Faroese have taken his advice to heart. Weihe acknowledges that some people have protested loudly and adds that it is in their right to do so. (…) “The fact that pilot whale consumption has decreased is a clear indicator that most Faroese people are rational thinkers and have taken our message seriously,” Weihe says.

A new study conducted by Jónrit Halling, who holds a PhD in Pharmaceutical Sciences, shows that young women in particular eat considerably less whale meat and blubber than before. She asked 200 randomly chosen adults about their intake of pilot whale. Only 17 percent said that they eat pilot whale more than once a month. Almost half – 47 percent – say that they rarely or never eat pilot whale. No women under 40 years of age are among those who say that they eat whale meat and blubber frequently.

It appears that pilot whale, which used to be considered a healthy food choice, has received such a bad reputation that it is now disappearing from Faroese dinner tables.