Whale meat on board a Norwegian whaler. The Scandinavian country ignores the international ban on commercial whaling that has been in force since 1986. © Michael Tenten/IMMCS 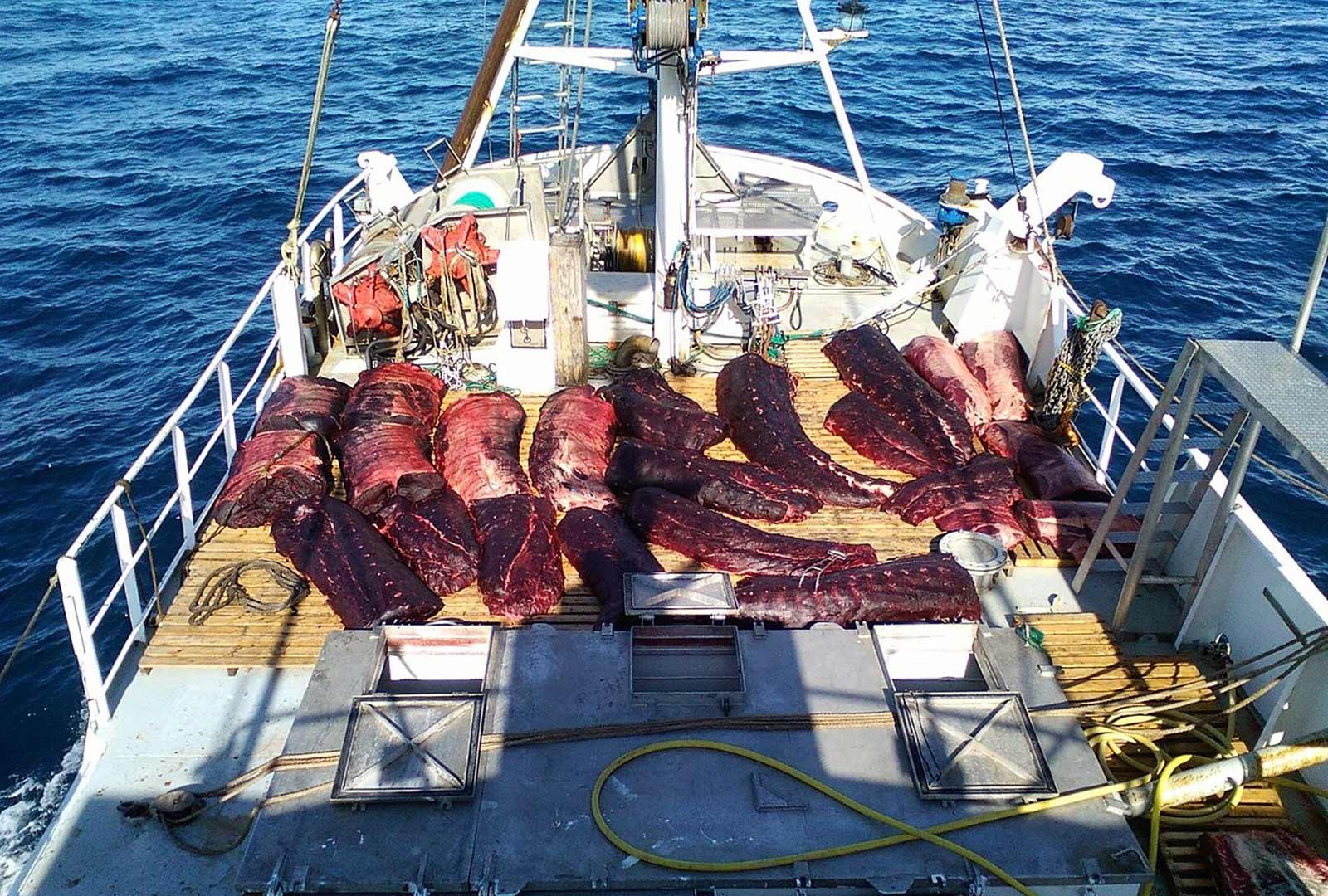 Whale meat on board a Norwegian whaler. The Scandinavian country ignores the international ban on commercial whaling that has been in force since 1986. © Michael Tenten/IMMCS

Faced with dwindling domestic demand, Norwegian whalers sell meat for dog food or dump it into the sea

Just days after the Norwegian whaling industry announced that 575 minke whales were slaughtered this season (the most in five years) new documents reveal that whalers are struggling to sell the whale meat—and even offloading it for dog food.

In August, Hopen Fisk, a company based in the northern Lofoten region, shipped 6 metric tons (~13,000 lbs.) of whale meat to a tourism company offering sled dog tours of Svalbard, according to documents obtained by the Animal Welfare Institute (AWI) working with NOAH, Norway’s largest animal protection NGO and Whale and Dolphin Conservation (WDC).

The Norwegian Environment Agency approved the shipment to Green Dog Svalbard and an individual sled dog racer. It was sent via Nor Lines, a subsidiary of the Icelandic company Samskip, even though Samskip pledged in 2013 to stop transporting whale meat.

Norway’s whaling titans and government leaders continue to perpetuate the false narrative that domestic demand for whale products is increasing. In reality, the very whales that help keep the ocean healthy and fight climate change are being fed to the dogs,

Hopen Fisk’s general manager acknowledged last month that the company does supply whale meat for dog food, according to a report by NRK, the Norwegian Broadcasting Corporation.

The article cites statistics that only one-third of the nearly 600 tons (~1.3 million lbs.) of whale meat estimated to have been produced from the 2021 hunting season was sold to stores in Norway.

Last year, 164 tons (~362,000 lbs.) of whale meat was available to purchase in Norway, compared to the 220 tons (~485,000 lbs.) sent to Japan, according to NRK. Additionally, Norwegian whalers have admitted that dumping unused whale (meat, blubber, bone, etc.) in the sea is common practice.

‘Killing whales is not just cruel, it is stupid’ 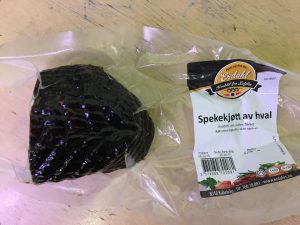 Whale meat is not only found in Norwegian grocery stores. It is also exported, fed to dogs – or simply thrown away. Image: Sasha Abdolmajid

How can we value the lives of these gentle giants so cheaply when they play such a massive role in mitigating climate breakdown? We need more whales, not fewer—killing whales is not just cruel, it is stupid!

Another whaling company, Myklebust Hvalprodukter, continues to sell both whale oil and raw whale meat for dogs on its website. In late 2016, the company sought permission from Convention on International Trade in Endangered Species of Wild Fauna and Flora (CITES) authorities in Norway to export minced whale meat to Denmark to be freeze-dried and processed as animal food, before being packaged and sent back to Norway for commercial sale.

Norwegian authorities asked their Danish counterparts, who vetoed the planned shipment because international trade in Northeast Atlantic minke products for commercial purposes is prohibited in Denmark.

Until recently, another effort to bolster the industry included selling whale products to fur farms to use in animal feed.

These developments are not surprising, given that recent public opinion polls show declining consumer demand for whale meat in Norway. A September poll commissioned by AWI, NOAH and WDC found that only 2 percent of Norwegians eat whale meat often, down from 4 percent in 2019. Among women surveyed, only 1 percent eat whale meat often, while no one under 35 years old indicated that they eat whale meat frequently. The survey of 1,037 Norwegians, ages 18 to 87, was conducted by Respons Analyse AS.

Since the beginning of 2019, Norway has shipped nearly 515 tons (~915,000 lbs.) of whale meat to Japan and 3.4 tons (~7,500 lbs.) to the Faroe Islands, according to Norwegian export statistics, despite ongoing whale and dolphin hunts in both regions that produce a significant amount of meat and blubber.

One week after the September 12 massacre of more than 1,400 Atlantic white-sided dolphins in the Faroe Islands, Norwegian CITES authorities approved a permit request from whaling company Lofothval (based at the Salmon Center in Bodø) to ship 0.86 tons (~1,900 lbs.) of minke whale meat to the remote Danish archipelago.

“For years, the Norwegian government has tried to make whaling profitable by giving subsidies for its promotion. The fact that minke whales are ending up as dog food shows the failure of this strategy and the absurdity of the situation. Norwegians in general do not want to eat whale meat and I doubt that they would feel happy about whales being killed to feed dogs,” said Dr. Siri Martinsen, veterinarian at NOAH.

The International Whaling Commission (IWC) imposed a global moratorium on commercial whaling in 1982, yet Norway formally objected and resumed commercial whaling 11 years later. Since that time, the country has killed more than 14,000 minke whales.