Taiji and the Liberal Dolphin Party 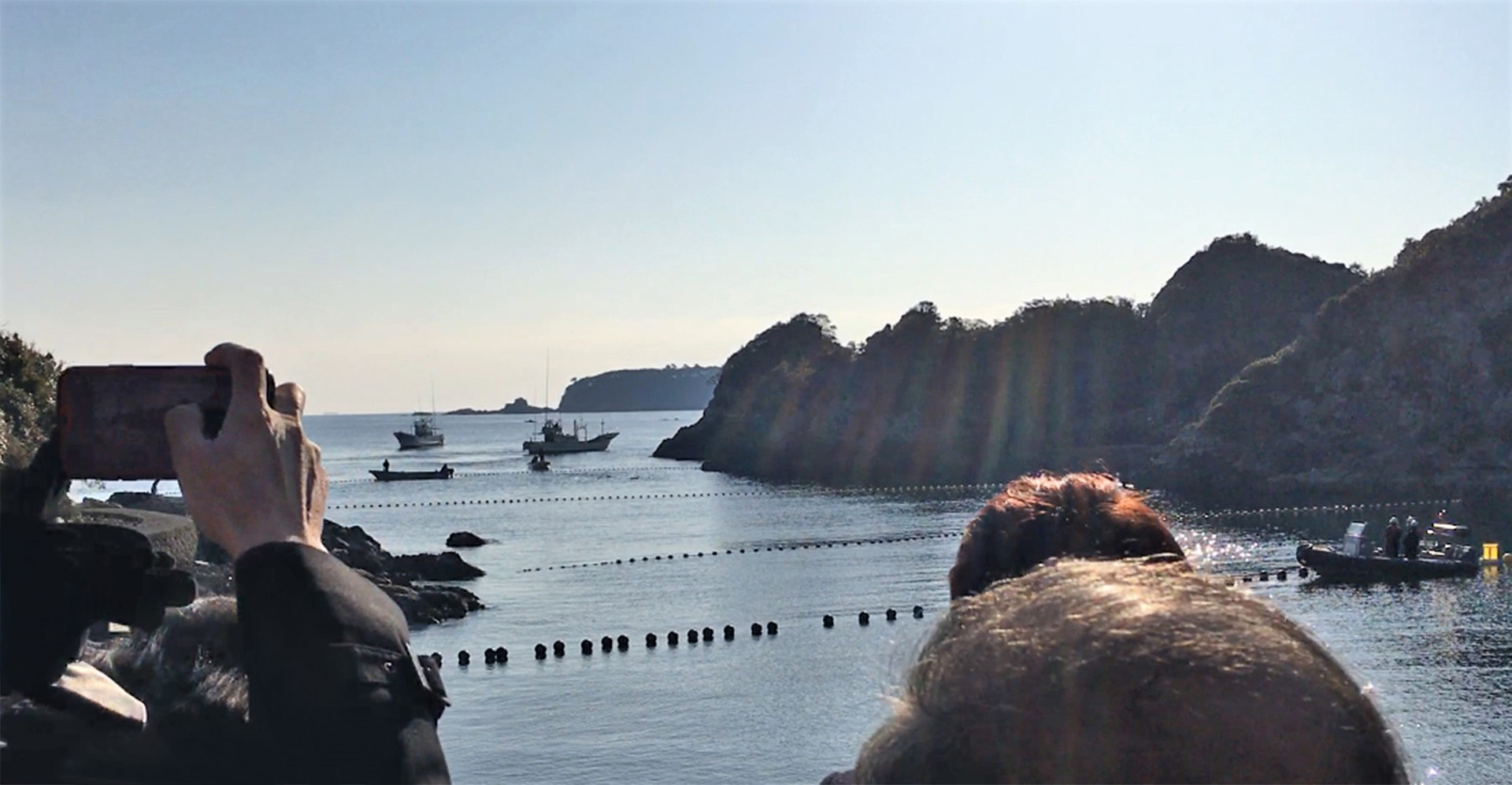 Dolphin hunt in Taiji: Behaved applause and pictures with the smartphone.

The tiny town of Taiji, and its dolphin hunts held in an innocuous local cove, have the deep support of Japan’s most powerful political forces.

“Dolphins!” Out went the cry, and the coiffed men lined up on the beach perked up and peered eagerly out into the Pacific, their tailored suits asparkle in the morning light. Sure enough, a pod soon splashed into sight – a churning mass of dark dolphins with striped sides, each about the size of a wild boar, 40 or 50 of them in a tight, panicked ball a half mile out.

They’d come from all over Japan to see this, the budding stars of the Liberal Democratic Party. The LDP is politics in Japan, where it has ruled for most of the last 60 years. Factions and alliances within the party play the same role here that entire political parties play in other countries. The men on the beach this morning were members of the LDP’s “Youth Association,” made up of local, prefectural, and national assembly members under the age of 45. 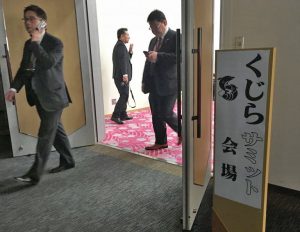 Each year they take a trip to study an issue of political importance, and this year they had come to Taiji for a “Whale Summit.” The future political leadership of Japan, a country struggling with military independence, the rise of China, reliance on nuclear energy, a plunging birthrate, and even a nasty domestic battle over tuna stocks – and yet here they were, in a tiny, rocky cove in Taiji to observe a dolphin hunt.

The remote coastal town is one of Japan’s smallest, and the seasonal take from the hunts is less than two million dollars before expenses, or under a hundredth of a percent of Japan’s total fisheries income.

Behind the clump of panicked dolphins, a row of Japanese fishing boats and skiffs appeared, the low thump of their engines rolling in on the sea breeze. The boats inched forward in a plunger formation, driving the dolphins before them and toward the men on the beach of the cove, an amplified voice booming out over the whole scene…

… and the type of dolphin you see here is skittish and not well-suited for live capture, unlike the bottlenose you commonly see in dolphin shows. These are striped dolphins, and they will be … and you can see they are drawing the nets across the mouth of the cove now. When they’ve pulled the nets all the way across, that will mark the end of this dolphin drive.

The men clapped politely and a few cheered, snapping pictures on their phones as the frenzied dolphins were driven out of sight into a small alcove to the side. They lined up for a group photo and walked back up to a nearby road, where a caravan of chartered busses, vans, and chauffeured cars pulled up to whisk them away. An hour later the skiffs emerged, laden with dolphin carcasses, paused to gather up the nets, and glided back out to sea.

“We had them all queued up and ready to go,” a fisherman tells me later, when I ask him how they managed to time things so perfectly, driving in the equivalent of a pack of hysterical torpedoes from 10 miles out, across a major shipping lane and against a notoriously strong current. “It’s a good thing they weren’t Risso’s,” he says, referring to the deep-diving larger species that are notoriously wary of shallow waters and can take hours to drive in. Taiji fishermen are permitted to hunt nine species, and each have their own quirks, and value. Striped dolphin, taken only for meat, are worth up to a few hundred dollars each, while bottlenose, treasured by aquariums as show animals, can go for tens of thousands, even before they are tamed and trained. 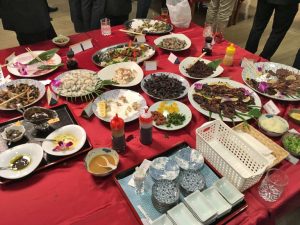 I’ve been coming to this cove since 2010, and have long ceased to be surprised by its power, its sheer gravity. Physically it’s a quiet, nondescript dent in the coastline, a craggy pockmark the locals call “Hatakejiri,” or the “ass of the field,” for when there was no road and fishermen used it to reach a rare strip of arable land. Half a century ago it was converted into a makeshift dolphin slaughterhouse, a spot remote and unimportant enough that the bloody work of culling dolphins wouldn’t bother other fishermen, who were tired of slogging through maroon-soaked waters on their way to market.

In the 1980s the cove was discovered by western environmental activists that washed in as part of the global anti-whaling movement, and in 2009 it became the setting for The Cove, a broadside documentary against the local hunts.

The Cove won an Oscar and the cove became ground zero for a bizarre, fervent battleground over whether hunting dolphins was an acceptable thing to do or not, or maybe over the very nature of acceptance. In the near-decade since, its pull has proved irresistible to activists, media, media grubbers, scholars, nationalists, bureaucrats, ambassadors, politicians, and even an odd assortment of Cove tourists, who always seem unsure of whether to train their cameras on the hunts at sea or the antics on land.

I was sucked in as a reporter for the Associated Press and have been unable to escape, witnessing dozens of dolphin drives, protestors fill the beach with placards and inflatable dolphins, Japanese nationalists hold a dolphin barbecue, activists strip down and swim out to bond with wild, panicked dolphins, the construction of a local police outpost to handle the crowds during hunting season and a captive swim-with-dolphin facility to draw crowds during the offseason, and even the conversion of the whole beach into a makeshift outdoor movie theater to screen a somewhat recursive film about the controversy.

The day before they watched the dolphin drive, the group of nearly 100 young politicians and officials gathered for an extended study session on Japan’s whaling and dolphin hunting practices. The current Japanese Cabinet, under Prime Minister Shinzo Abe, has repeatedly voiced support for the dolphin hunts, and tiny Taiji, with just over 3,000 residents, has benefited from an every-growing flow of financial and political support, as well as its own expanded police force and a permanent coast guard dispatch during hunting season. 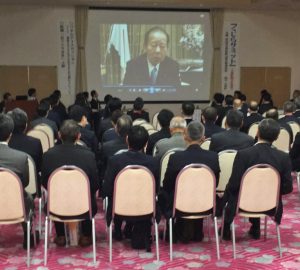 “It is my sincere wish that everyone here from the LDP will learn about whaling culture, take this opportunity to actually eat whale, and deepen their appreciation of whaling even more,” said Toshihiro Nikai, the venerable national lawmaker and Secretary General of the party, in a recorded video message. Nikai, a savy, old-school power broker who has represented Wakayama Prefecture since 1983, has fostered the whaling and dolphin hunting regions in his district through the “Save the Whales” movement and the fury of The Cove, successfully casting the hunters as victims of international pressure and pushing whale and dolphin meat as patriotic delicacies.

Later that night in Taiji, everyone packed in for a feast prepared by Taiji residents at “White Whale,” (or “Moby Dick” depending on the translation) a local hotel. The tables were crammed with dishes to form a whale and dolphin buffet – prime sashimi cuts of whale tail, throat and belly, ginger “stamina” roasts, boiled tongue, fried skin chips.

Local fishermen and residents mingled with elite bureaucrats from the Fisheries Ministry and the young politicians, who repeatedly gave speeches pledging to “protect whaling culture,” and “stop illegal interference” by activist groups. A never-ending stream of waitresses carrying sake and beer flowed out from the kitchen to handle the infinite toasts, and by the time I spoke to everyone the next morning (on the importance of a global dialogue about sensitive issues like whaling), I stared out into a sea of bloodshot eyes.

Whatever the actual knowledge imparted to the LDP’s upcoming generation of statesmen during the study trip, the implication of the two-day Whale Summit was clear – the tiny town of Taiji, and the dolphin hunts held in the innocuous local cove, have the deep support of Japan’s most powerful political forces.

*Jay Alabaster is a PhD student and adjunct professor at the Walter Cronkite School of Journalism in Arizona State University. He currently lives in Taiji, Japan, where he is working on a book and his dissertation. You can find him on Facebook at http://www.facebook.com/alabasterjay. His email is jay.alabaster@asu.edu.