Red sea after a pilot whale hunt on June 5, 2012 in the Bay of Sandur, Faroe Islands. Photo: Hans Peter Roth

A total of 1,534 pilot whales and dolphins had already been slaughtered in the Faroe Islands this year by mid-November. A bitter setback for whale and dolphin protectors. Nevertheless, there is reason for hope. 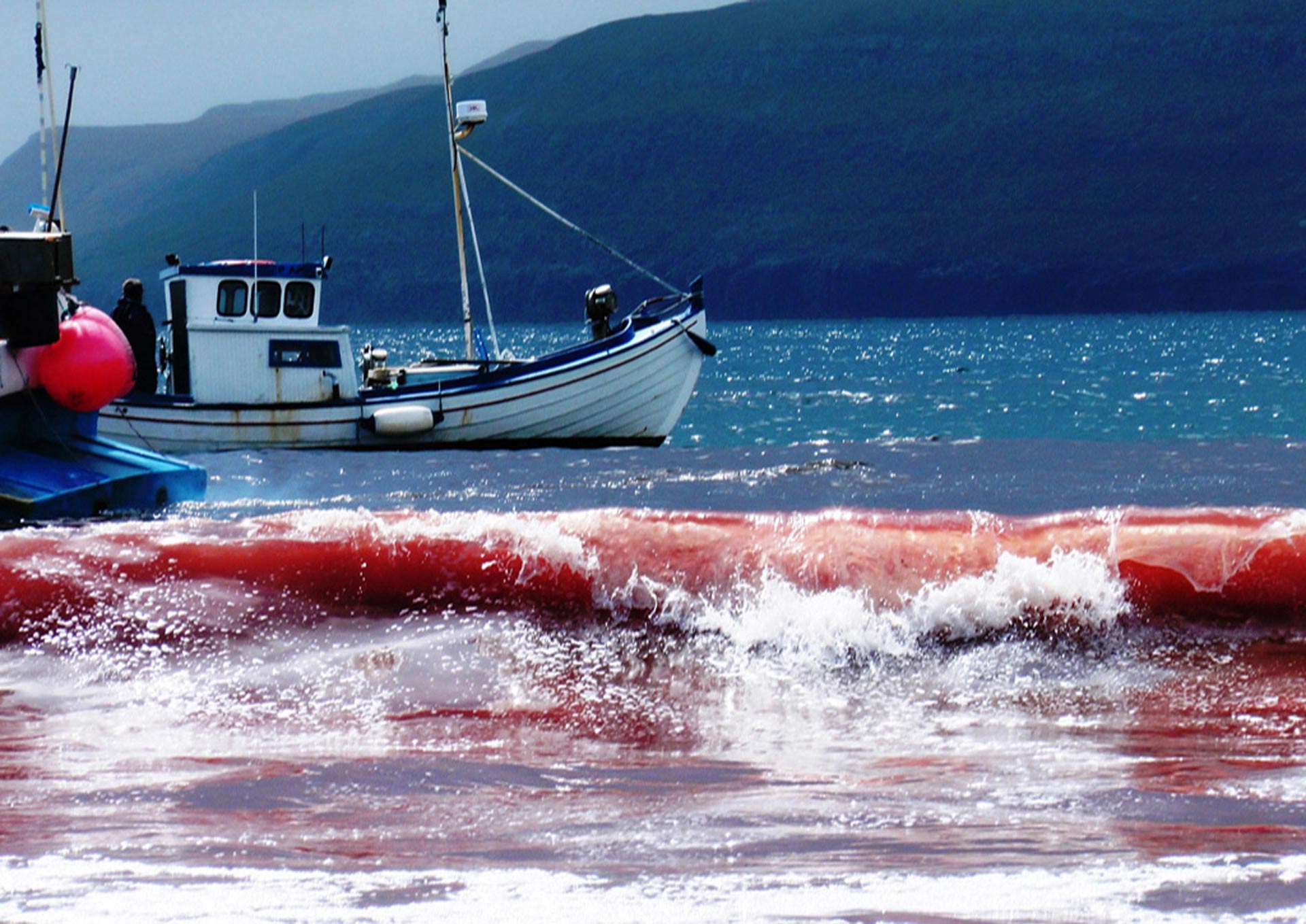 Red sea after a pilot whale hunt on June 5, 2012 in the Bay of Sandur, Faroe Islands. Photo: Hans Peter Roth

T he year 2013 had begun so hopefully for whale and dolphin protectors. Not one pilot whale hunt until mid-July in the Nordic Faroe Islands. Then, on July 21st, the first disillusionment came when 125 pilot whales were driven and slaughtered in the bay of Viðvík. The floodgates seemed to open. The 267 animals slaughtered in one day on 30th July in Fuglafjørður, on the remote archipelago between Scotland and Iceland, was the largest mass killing of pilot whales in eight years.

At the same time, Dr. Pál Weihe, head of the department of public health in the Faroe Islands since the 80’s, has warned against the consumption of pilot whale and dolphin meat: for example, because of greatly increased levels of mercury and other pollutants, with a variety of health consequences. Weihe’s warnings are proven by studies, and they are listened to in the Faroe Islands – at least partially. So today, young Faroese women and pregnant mothers refrain largely from eating such meat, and children often do not even know how it tastes.

But the hunting of pods of pilot whales which are sighted close enough to shore in Faroese waters, to be driven into one of the 23 approved bays, seems to persist unabated – at least for now.

Thus the 13th of August 2013 proved to be an unlucky day for the pilot whales and dolphins around the Faroe Islands. On that day, as many marine mammals died in one day than for 19 years. First a fisherman spotted a pod of pilot whales near the island of Sandoy. The islanders called out a hunt and 135 pilot whales, belonging to the dolphin family, were eventually killed in a small bay near the fishing village of Husavik. 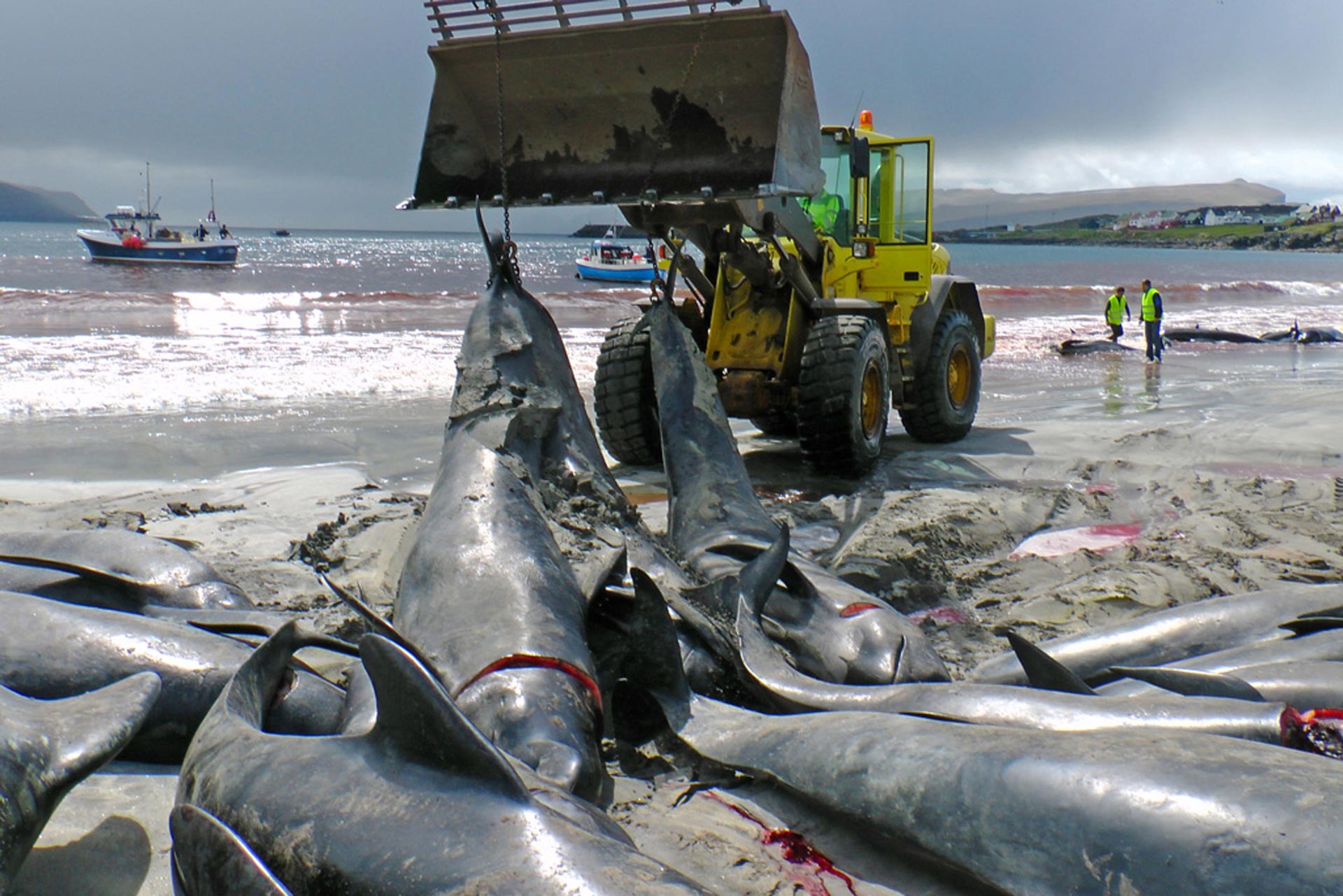 Hunted pilot whales are dragged into the water and then towed to the nearby port. Picture was taken after a hunt on June 5, 2012 in the Bay of Sandur. Photo: Hans Peter Roth

On the same morning, fishermen discovered a large pod of initially unidentified marine mammals outside the southernmost island of Suðuroy. It was a mixed group of dolphins and pilot whales. Would they separate the pilot whales from the dolphins? Here, too, a grindadráp, a hunt, was triggered. By evening, residents of the Hvalba district and neighbouring communities had killed 430 Atlantic white sided dolphins – and not a single pilot whale among them. So on that day 565 cetaceans had lost their lives.

Outsiders, and in particular animal rights activists, are wondering why the Faroese still kill so many pilot whales and dolphins today. “You have to ask what happens to the vast amounts of whale and dolphin meat”, said a Faroese opponent of the dolphin hunt who wishes to remain anonymous: “It is supposedly intended solely for personal consumption.” 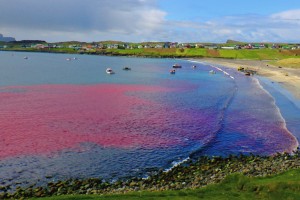 The scarlet stain of the pilot whales’ blood drifts with the tide. Picture was taken on June 5, 2012 in the Bay of Sandur. Roth

Locals that defend the grindadráp have explanations: For centuries the Faroe Islands were an isolated island nation with a small, close knit, Viking population. They endured and withstood with toughness and durability, the oppression of various superpowers, famine and many other privations, in harsh climatic conditions. As such, it is very impressive that the unique Faroese culture has survived to the present day. This includes the pilot whale hunt.

Until the 19th Century the sighting of pilot whales decided whether whole villages were fed or went hungry through the winter. In small wooden rowboats, the men searched for whales and tried to drive them into a bay. If they managed to kill some animals, there was then a chance to kill the whole pod of whales, since pilot whales have an extreme social cohesion and rush to help each other. 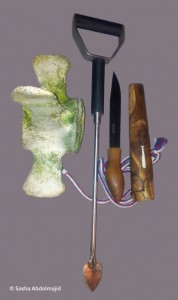 This social behavior of the marine mammals is also their undoing today. However, the fight in contrast to earlier, is completely different and does not have much in common with the old tradition of whaling; locals drive the cetaceans with high-horsepower boats, speed boats and jet skis.

Although the whalers have developed methods to kill their prey quickly with a type of lance which simultaneously severs their necks and the main artery – if done properly. Either way, the exhaustive agitation for up to ten nautical miles and the subsequent systematic killing in the bloody water is an unimaginably cruel ordeal for these highly intelligent, self-aware, sensitive animals.

This remains unchanged even through the protestations of the hunters, who claim that the drive hunts are humane, killing quickly and the whales would have spent a beautiful life in freedom til the end, unlike caged breeding animals for the meat industry

says a Faroese who is actively engaged against the grindadráp, also anonymously.

“For many people outside the Faroes, the images of the whale slaughtering stand in stark contrast to the reputation of the islands for its natural beauty and purity”, say the Faroese hunt opponents: “No doubt that the grindadráp overshadows the image that we present to you. Not every tradition is worth preserving.”

In fact, the Faroe Islands are a kingdom of contrasts. Living in the natural beauty, these are extremely hospitable, open and sociable people who you simply take to heart. It is difficult not to like the Faroe Islands and their inhabitants. And that is exactly where the opportunity and hope for the future lies: In the discrete support of the Faroese opponents of the pilot whale hunt, in dialogue with the whalers and the development of whale watching and ecotourism.

This future has begun. Just recently, Faroese pharmacist Jónrit Halling, questioned 200 Faroese adults about their eating habits. Only 17 percent said they consume whale products more than once a month. Nearly half – 47 percent – said that they eat little or no whale meat at all. Not a single woman under 40 years indicated to eat pilot whale meat and blubber often.

The Danish Environmental journalist Helene Hesselager-O’Barry, who has translated a recent report on this topic, finally concludes:

It seems that pilot whale meat, once regarded as a healthy food, has such a bad reputation already, that it will disappear from the tables of the Faroese in the foreseeable future. 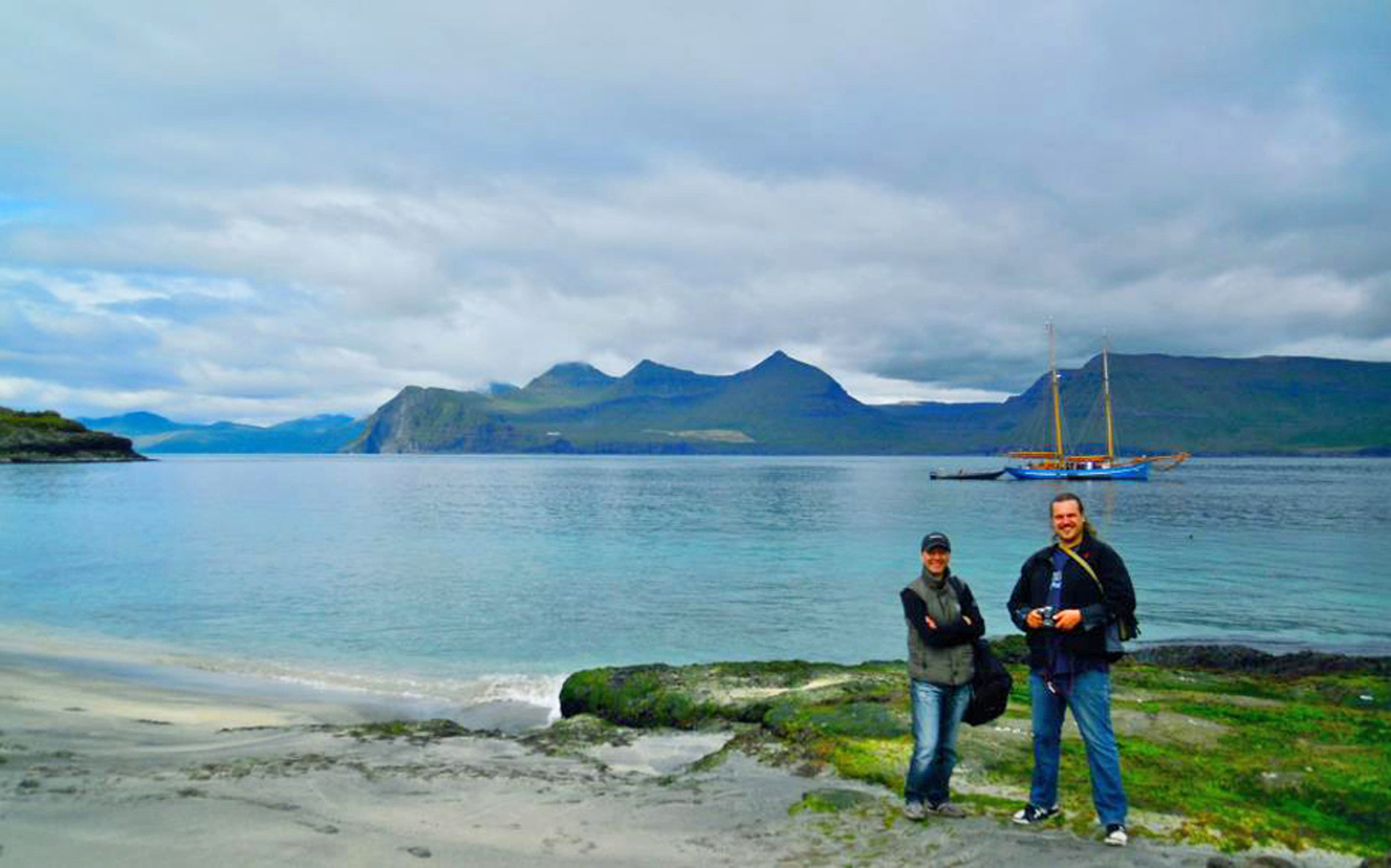 Sasha Abdolmajid and Faroese environmentalist, Rúni Nielsen, in the stunning surroundings of the Koltur in the Faroe Islands. Photo: HP Roth