China – the latest nightmare for dolphins and whales

China becomes the latest nightmare for captive cetaceans due to the expansion of ocean parks. This begs the question does China have to follow the same errant path as the western world? 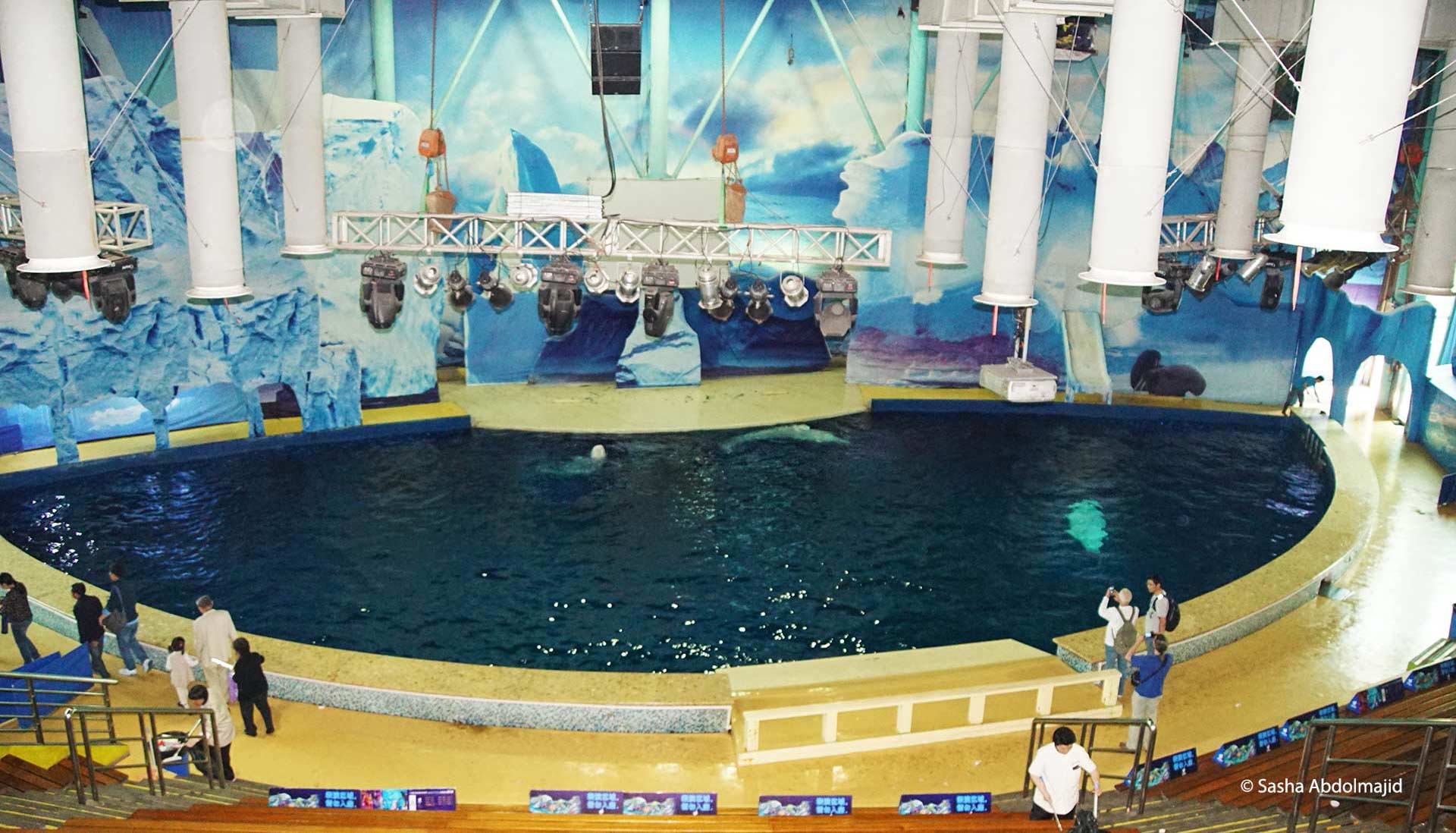 W ith the growth of public demand for ocean theme parks in mainland China, increasingly more wild dolphins and whales are being captured and trained to entertain Chinese customers for profit. Conservation and education is the clichéd reason provided by the profit- oriented ocean parks. However, a newly published investigative report documents the facts – it shows the cruelty involved and the potential illegality. Animal rights advocates including scientists, believe there are animal-friendly alternatives for such “entertainment and education.”

So far in mainland China, there are 39 ocean parks, and another 14 are under construction. The latest controversy is sparked by the newly opened ‘Zhengjia Sea World‘, which has been renovated from a shopping mall in Guangzhou.

In China, these oceanaria are holding nearly 500 captive cetaceans of 11 species, half of which have been captured from Taiji in Japan and the Sea of Okhotsk in Russia over the past 5 years. Profitable oceanaria and dolphin shows are the inconvenient reasons. Consequently, the growing demand of such facilities containing dolphins and whales has been a major threat to the wild cetaceans of those regions.

Aiming to raise public awareness of the cruelty of cetacean captivity, international experts and activists, along with their partners from China, Taiwan and Hong Kong, formed the ‘China Cetacean Alliance’ (CCA) in 2014. The CCA investigators spent six months conducting field visits to 14 of the ocean parks in China. Combining these first-hand observations with information from CITES (Convention on International Trade in Endangered Species of Wild Fauna and Flora) and other public sources, the CCA published the “Investigation Report on the Industry of Captive Cetaceans in China,” preceding an international conference on marine animal captivity in December. 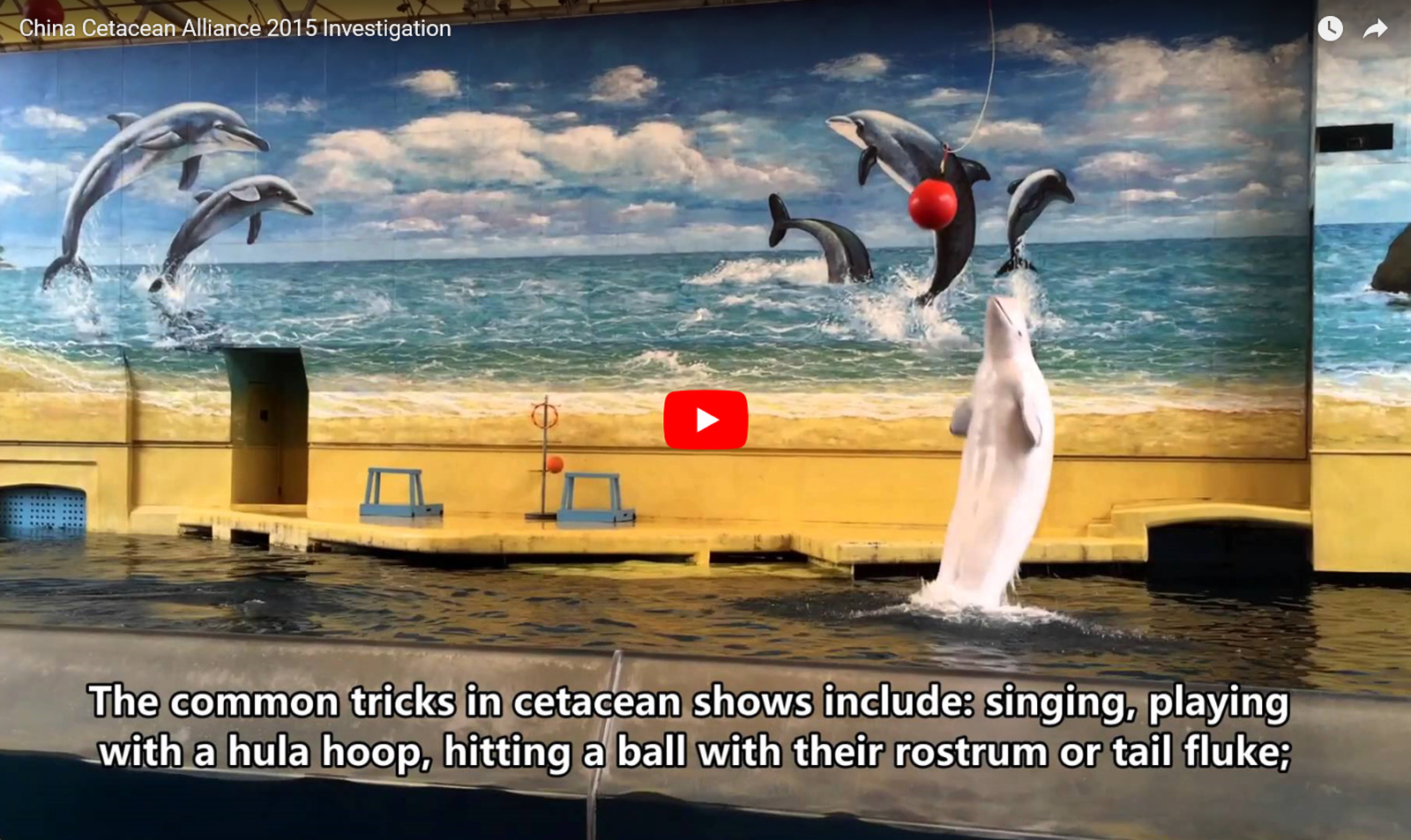 Dr. Naomi Rose, a marine mammal scientist at the ‘U.S. Animal Welfare Institute’, a member organisation of the CCA explains,

In their natural environment, cetaceans travel up to 160 kilometers a day on average, and can dive up to 300 meters deep. However, the average dimensions of the pools in Chinese ocean parks are 6 meters deep, 15 meters wide and 20 meters long, which is inadequate to satisfy the complicated behavioral needs of cetaceans in captivity. In addition, stress caused by forced performance and noise can trigger neurotic behaviors in captive cetaceans.

She concludes that cetaceans are unsuited to captivity and the captive environment.

“Without a doubt, the living conditions at the Taiwanese and Chinese facilities are worse than the international standard” explains Dr. Rose. The report points out that there is a lack of definition of “animal welfare” in China’s legal system, and there is no database of numbers of cetacean importations, births and deaths available to public. Thus they are by no means protected in this country.

It is because dolphins are wholly unsuited to the unnatural captive environment of tiny, roofless pools, chlorinated water and living in such noisy surroundings, that it can cause them stress and depression, which are known to adversely affect their health and often their lifespan too. But this information is never revealed by dolphinaria or amusement parks. Instead, as the report states, to attract customers they often provide misleading messages such as “dolphins love to interact with human beings” and “they have fun when pleasing the audience.”

The purpose of the parks is clearly not education as they claim, it is profit. The entertainment industry is rapidly expanding in China. For example, the ‘Haichang Ocean Park Holdings’, which is the largest operator with 6 parks in mainland China, attracts more than 10 million visitors each year. It made a profit of 192 million RMB ($29.000.000) in 2014, an increase of 77% on the previous year. 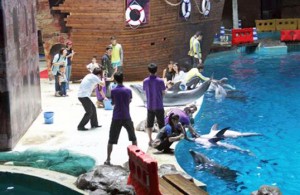 Visitors pay to have photographs taken with dolphins at Hangzhou Polar Ocean Park. The dolphins must hold this pose for many minutes during these sessions.
Photo: China Cetacean Alliance

In the meantime, investigators found that another famous corporation ‘Chimelong’ bought 7 endangered orcas for its ‘Ocean Kingdom’ in Guangdong, but only 2 were recorded in the CITES trade database. The CCA has urged the government to investigate whether this was an illegal trade.

Captive cetaceans in Taiwan are not safe from suffering either. There are four parks holding captive cetaceans, confined in small and outdated facilities. In particular, Dr. Rose observed that the dolphin show at the ‘Farglory Ocean Park’ in Hualien is “extremely loud – perhaps the loudest show I’ve ever witnessed.”

Since 2002, the park has imported 17 dolphins, 9 of which have died due to mistreatment. The Farglory Ocean Park and the ‘Yehliu Ocean World’ are described as “sweatshops for animals” by the ‘Environment and Animal Society’ of Taiwan.

Dolphin shows are always a great attraction for uninformed tourists. The dolphins’ ‘cuteness,’ their apparent smile and their behaviours are often misread even when they experience severe suffering.

In 2013, Pinky, a then 14 year-old bottlenose dolphin held at Hong Kong’s ‘Ocean Park’, was filmed ramming into the pool walls repeatedly, which is a typical self-destructive behavior. The management of the park tried to ameliorate the resulting adverse publicity by asserting this was just a leisure habit of Pinky, but the scandal sparked the first public anti-cetacean captivity campaign in Hong Kong.

As more than 20 million mainland Chinese tourists have purchased tickets to Hong Kong Ocean Park since 2003, making half of the total number, what has substantially concerned Dr. Samuel Hung, the Chairman of ‘Hong Kong Dolphin Conservation Society‘ and one of the scientists involved in the campaign, is the example that the Hong Kong Ocean Park is playing to its counterparts in mainland China. He blames Ocean Park for promoting the dolphin shows, thus sending misleading messages, such as “captive dolphins live better than their counterparts in the wild.”

Unlike the other facilities in mainland China, which are often operated by commercial companies, the Hong Kong Ocean Park is run by a charitable trust of which the largest stakeholder is the Hong Kong government. Dr. Hung urges them to stop promoting dolphin captivity for the sake of “conservation advocacy”, which is one of the mission statements of this park.

Dr. Rose also thinks that the Hong Kong Ocean Park is “most certainly setting a bad example to counterparts in mainland China.” She believes that, as a leading institute of its kind, the park should start exploring alternative entertainment shows that do not involve animal suffering, such as hi-tech CGI, animatronics, virtual reality and IMAX 3-D theatres. She sums up,

Seeing old-fashioned circus shows is actually boring for the modern teenager. It’s time to enter the 21st century instead of insisting on remaining in the 20th. 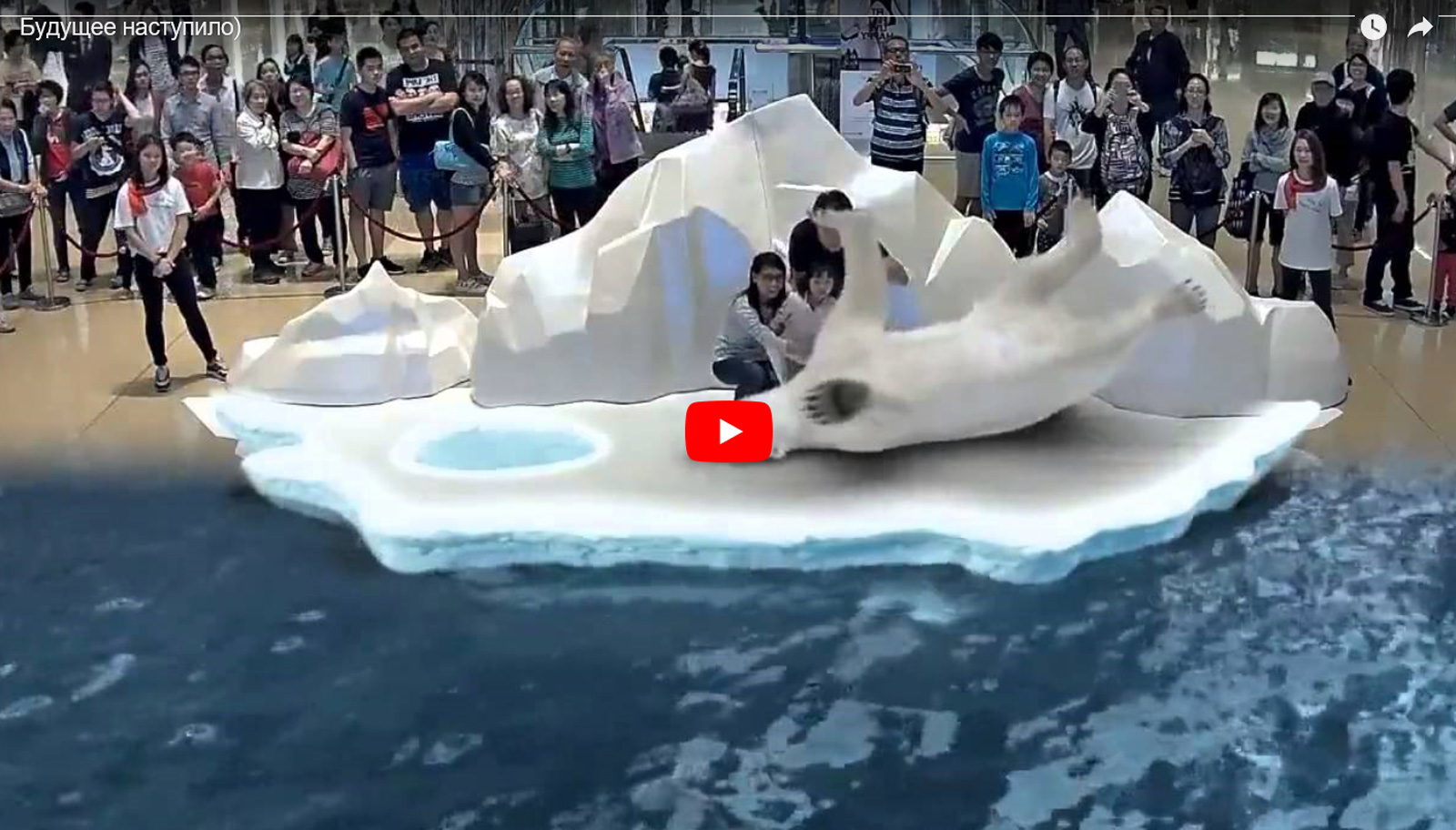 After all, the influx of Chinese tourists to dolphinaria and parks in mainland China, Hong Kong and Taiwan undoubtedly indicates a surge of demand for entertainment performed by captive animals in China. The question is, while recent years have witnessed a drop in cetacean captivity, along with the rise of animal rights awareness in western countries, does China have follow to the same pattern?

In other words, do Chinese customers have to obtain entertainment which involves animal suffering? The answer from Dr. Rose, as well as other animal activists in China is a definite “No”. They have just taken the first steps to prevent more cetaceans from enduring the cruelty of captivity in China.

This is a translation of an article published in the Hong Kong ‘inmediahk‘.