A Deadly Business with Dolphins

Dolphin activist Sasha Abdolmajid calls for a rethinking to protect the marine mammals. Findings after a trip to Japan -Appeal is “Avoid dolphinaria and marine parks.” 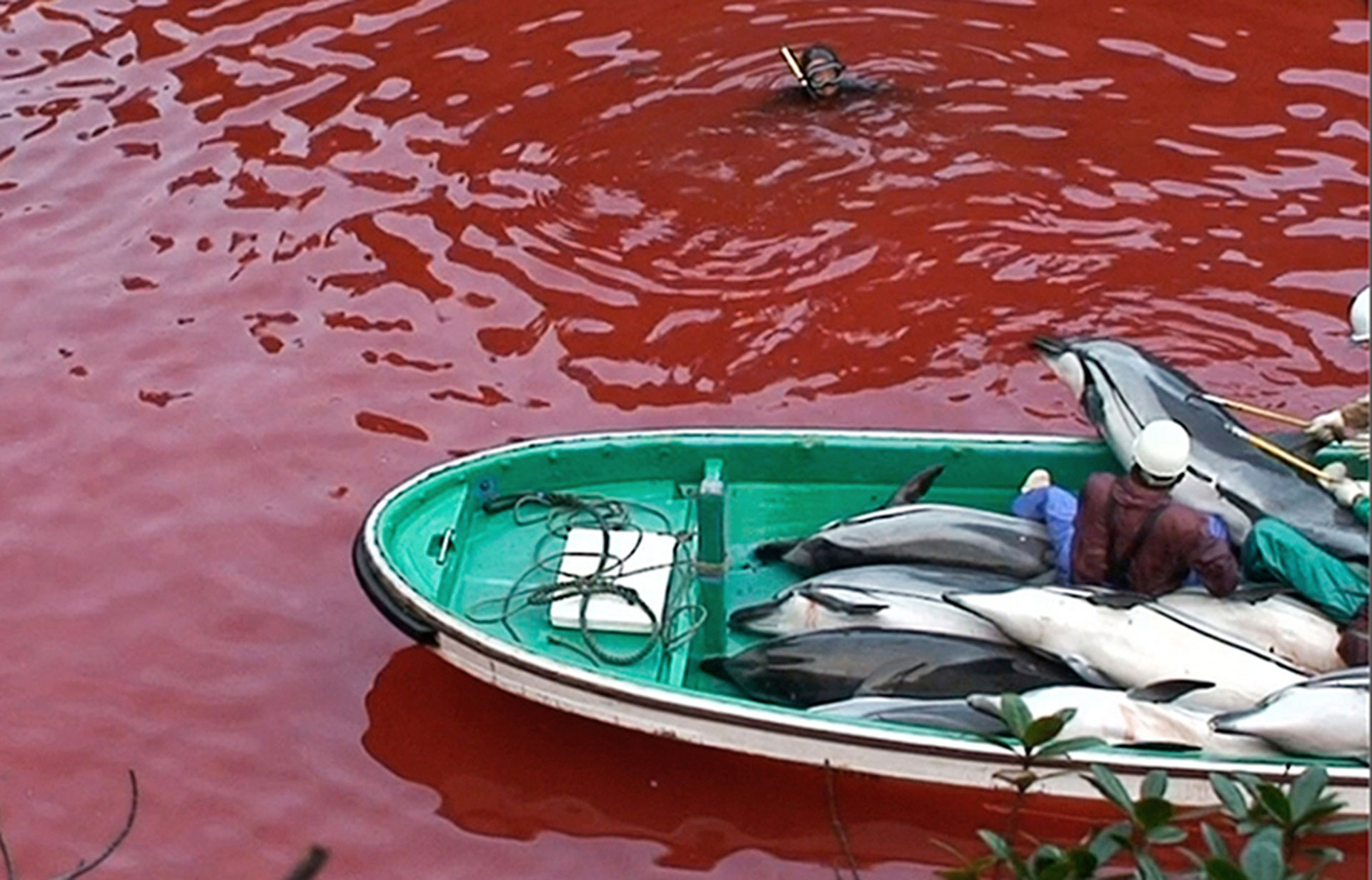 W ith the screening of the documentary The Cove about a year ago he brought attention to the cause of dolphins: The Oscar-winning film shows, amongst other things, the dolphin hunt in the cove of the fishing village of Taiji in Japan.

Taiji is the world’s largest exporter of live dolphins. In the previous season that had just ended, about 900 animals were slaughtered and  about 250 dolphins were sorted out for live sale.

Sasha Abdolmajid wanted to wake the people up in the region with this type of publicity. “How long will the world still be watching with what happens with nature?” He asked then in a conversation with the Super Sonntag, knowing well, his sober assessment, that “there are even bigger problems in the world.” But, he argued, “We have to start somewhere and become active.”

Sasha Abdolmajid has continued to be active and has also continued his private commitment. Numerous activities and film screenings in schools of the district are evidence of his tireless fight against the slaughter and captivity of dolphins.

In the meantime, the animal rights activist has also visited Japan to personally experience events there – he has returned with more than just frightening images. After his direct encounter with Japanese tradition and culture, and countless conversations, this is one of his main findings:

We as outsiders can change little in Taiji. Only the Japanese can do that. We should first start to put our own houses in order. 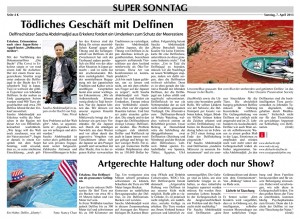 The newspaper article was a half-page in size

Meanwhile, Sasha has a certain understanding of the Japanese. With the constant accusations from the West, and especially by the aggressive actions of animal right‘s activists, the Japanese find themselves pilloried and try with all their might to defend the traditions rooted in their own culture.

Abdolmajid: “Even the Japanese  who are critical of the dolphin hunts, describe  aggressive foreign animal rights activists as eco-terrorists. This kind of confrontation is counterproductive.”

“I went to Japan to learn and not to point the finger at the Japanese,” says Sasha firmly and urges a rethink. Europe should become a role model and be an example for other nations to follow. And here every individual is required.

The simple, and in the eyes of the activist, only solution: Avoid dolphinaria. The problem now is, in fact: the demand for dolphin and whale meat in Japan declines and produces less profit. But dolphinaria pay up to $150,000 for a trained dolphin. Consequently, Abdolmajid stresses: My message is:

Do not buy a ticket to a dolphin show, do not support this cruel industry.

He continued: “To end the Taiji dolphin hunt, we have to stop the demand for new wild catches, by ensuring that the dolphinaria close worldwide. Precisely because the lucrative trade in live dolphins is what keeps the dolphin hunt alive and subsidizes it. Dolphin meat is simply a byproduct of the cruel and unprofitable hunt. Our contribution in Germany would be the closure of the remaining two dolphinaria (Duisburg and Nuremberg) and the boycott of all dolphin shows worldwide. Holiday destinations such as Spain, Turkey, Egypt, USA (SeaWorld) and the Ukraine are particularly important. We should follow countries like Switzerland where dolphin imports are prohibited by law.”

For Sasha Abdolmajid, keeping dolphins in dolphinaria is “modern slavery for our entertainment” and a huge factor of stress for the animals. The dolphins are kept deliberately hungry, they have to perform tricks for food. The confinement of dolphins is simply not appropriate to the species and in the 21st century, on the way out. As self-aware beings dolphins, as well as whales, are able to a large extent to experience emotions and are much more affected by captivity than previously thought. Sasha:

In dolphinaria these highly intelligent animals are degraded to living dead, so to speak, kept tranquilised by drugs.

Certainly not for only animal right‘s activists, this is an important argument in favour of the permanent closure of dolphinaria.

Proper welfare conditions or all just a show? 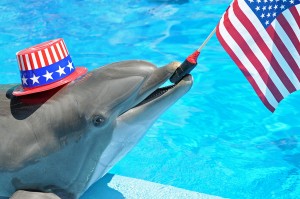 The law states that a dolphinarium with five animals must have a pool of only about 40 x 10 meters and four meters deep. In the wild however, dolphins dive up to 300 meters deep and swim up to 100 kilometers a day.

To swim for at least one minute fast and straight ahead, the animals would need a 850-meter long pool. Measured by the natural range of motion of the dolphins, a dolphinarium pool is way too small.

Abdolmajid points in this connection to statements by the marine biologist Dr Karsten Brensing (Whale and Dolphin Conservation). The dolphin expert points out:

Proper welfare of dolphins is in our view not possible. There are many reasons why. It is virtually impossible to create a natural, social structure. The animals are taken from their families and brought together artificially. The enclosures are too small to sustain a natural group, so that young male animals must be separated. They are deprived of their normal lives. In captivity, calf mortality is a problem and breeding is not sustainable.

For Sasha dolphinaria are “pure money machines and are used merely for entertainment and profit.” Contrary to their claims, this is not education. He says further: “The children are being taught that it is okay to uproot intelligent, self-aware marine mammals from their natural environment and their families and put them to work for our amusement. It is concealed how much they suffer in captivity. Then the dolphin’s smile is nature’s greatest deception.”