There is always ‘Hope and Faith’ at the Cove says activist

Once called 'Sad and Lonely' these two spotted dolphins have now been renamed 'Hope and Faith'. They have become mascots for the cause. Photo: Sasha Abdolmajid

Taiji – Dolphin advocate Sasha Abdolmajid has just returned from a visit to Taiji, Japan. Abdolmajid visited the tiny town made famous in The Cove documentary, to observe the dolphin drives and break down some barrier. 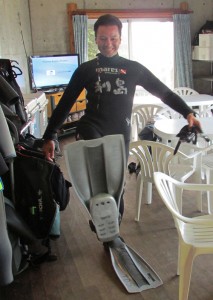 Sasha describes Japan as a country of contrasts as he prepares to swim with protected dolphins in Toshima Island.

Abdolmajid, who is from Germany appears to be bridging the divide between cultures very successfully, even though he’s a relatively new activist to the dolphin cause.

While in Taiji, Sasha who is of Iranian origin, met Yoav, another new dolphin activist from Israel. “Yoav and Sasha are different just like every human being is different,” wrote Hans Peter Roth in this Save Japan Dolphins blog post, but “here we now have two men, one from Iran and one from Israel, standing side by side, for the dolphins, united.”

Abdolmajid, who said he only saw The Cove movie “11 months ago,” added that the documentary had a profound effect on him. “It left me sleepless and restless,” he explained, and “I became active right away.” His first stop was the Faroe Islands with Hans Peter Roth, and Ric O’Barry of the Dolphin Project and Save Japan Dolphins.

Sasha then teamed up again with Roth, a journalist and author who works with Save Japan Dolphins, and embarked on a trip to Taiji. He encountered his first dolphin hunt “on a vantage point” he said, “in a surreal setting of beauty and horror.”

Taiji is often described as an incredibly beautiful place and Abdolmajid appears to suggest that it is a town with two sides:

The Pacific Ocean glittering in the morning sun with lush green mountains in the background and a majestic coastline. Then at the same time there were 12 high-engine powered boats out there before my eyes – chasing dolphins. I feared the worst and hoped for the best – for the pod to escape the dolphin hunters.

The pod did escape that morning Sasha said. “My relief felt as bright as the sun,” he added.

But just observing the drives wasn’t enough for Abdolmajid, he wanted to tackle long standing barricades. “Every story has two sides,” he said.

“I talked to a local fish and dolphin meat seller in Kii Katsuura, a town adjacent to Taiji,” Sasha explained and “I asked him, via Google Translator, hand signals and very little English, if he eats dolphin meat? He looked around to make sure that no one observed him and said, laughing, “NO, I don’t! Young people do not ask for dolphin and whale meat. Only old people ask for it, but the demand is decreasing.” 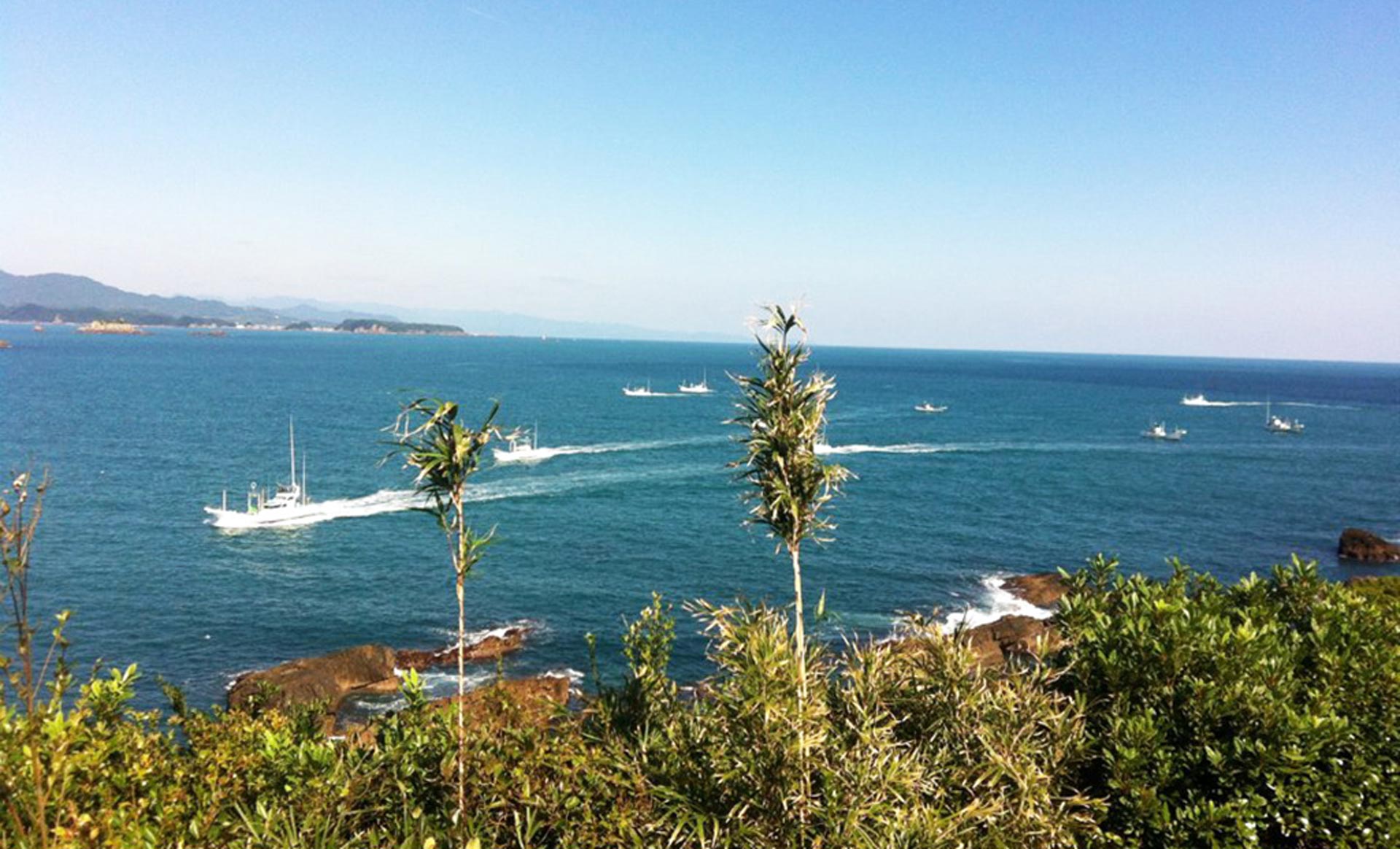 My relief felt as bright as the sun as a small pod of Risso’s dolphins managed to escape. Photo: Sasha Abdolmajid

A journey of self-discovery

The activist said he realized that “things would definitely not be solved by vandalism, destruction of property, by harassment and insults. Cooperation, rather than confrontation is needed” he added, along with an ability “to learn, to understand, to see all sides.”

“What would the dolphin hunters do if they stopped hunting?” Sasha asks, “what alternatives is there for them professionally, to earn a living and feed their families? Not many activists think about that or the general complexity of the situation down there.”

Abdolmajid walked down to visit the Taiji Whale Museum which he said is “just 200 meters down the road” from the Cove. “Once again the bizarre contrasts of this place were striking” he explained, “they could literally kill dozens of dolphins around the corner while a clapping audience watched a dolphin show right here.”

Speaking with the lady at the whale museum bookstore, Sasha said:

When I explained to her that until a few years ago there were up to 2000 dolphins killed in the cove next door every season and even last season still close to 800, she didn’t believe me, even though I know the official numbers. This is how little information goes round in Japan sometimes, especially if not pertinent.

Taiji Whale Museum displays the dolphins captured in the Cove, and two spotted dolphins held a special place in Abdolmajid’s heart. Originally named ‘Sad and Lonely’ by dolphin activists, the dolphins were held in the smallest tank in the world inside the whale museum.

Seeing the lethargic nature of the two cetaceans, a large campaign was launched to ask the museum to move the dolphins to a larger tank.

“Those two beautiful spotted dolphins were vivid and eager to interact with us, in spite of still being confined in a small pool,” said Sasha. The dolphins had been moved to an outdoor pool with a little more room and renamed ‘Hope and Faith’.

Abdolmajid said that thanks had to go to “Enson Innoue, a famous Japanese martial artist, who convinced Mayor Sangen of Taiji to free these two poor animals.” And also to Mayor Sangen for his compassion, and because he ordered that the tiny tank be closed. [See video of Hope and Faith]. 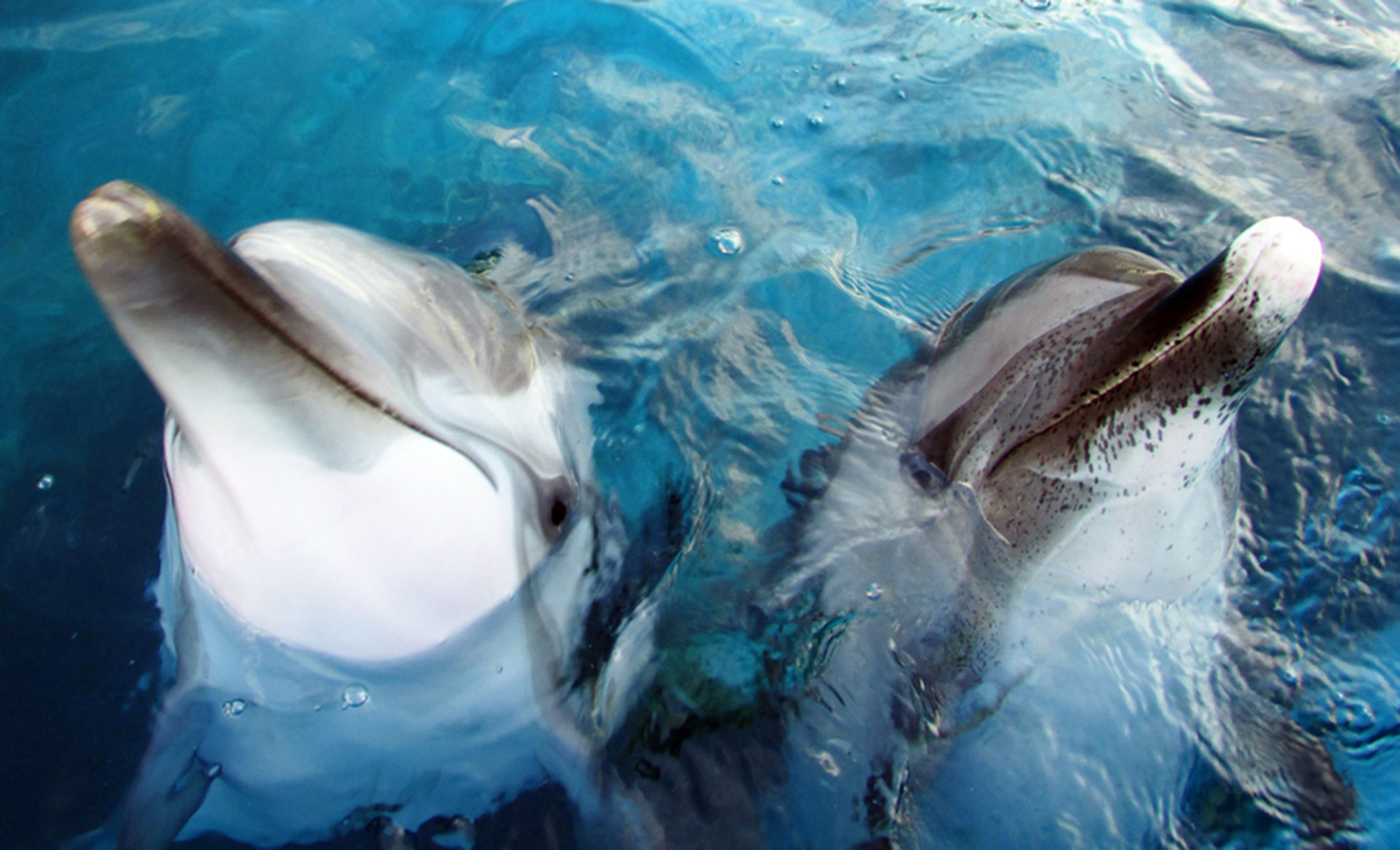 Once called ‘Sad and Lonely’ these two spotted dolphins have now been renamed ‘Hope and Faith’. They have become mascots for the cause. Photo: Sasha Abdolmajid

Toshima, an island where dolphins are revered

The dolphin advocate experienced the diversity within Japanese culture at Toshima, a small island south of Tokyo where everybody loves dolphins.

“Was I still in Japan?” Sasha asked.

“The resident bottlenose dolphins that live in increasing numbers around this small volcanic island are strictly protected by the islanders,” Abdolmajid explained. “Two dolphins here” he continues, were “officially declared residents in 1998 by the Toshima Mayor!”

Sasha had the opportunity to snorkel with the wild dolphins in Toshima; something he said that blew him away. “What incredible creatures they are! When you lock eye with them it becomes undeniable that these are intelligent, self-aware beings.”

Solutions and a Japanese uprising

For the Iranian-born activist from Germany, it became evident that a future solution for Taiji was already in play at Toshima. Dolphin watching tours and “perhaps even dolphin swimming” he said, could replace the dolphin hunts at the Cove.

It was while in Tokyo that Abdolmajid met up and had an interesting conversation with a Japanese activist named Toshiaki:

Toshiaki, an animal and dolphin lover expected us at the hotel and invited us to an animal welfare demonstration the next day. Hundreds of very well organized enthusiastic “No Fur” demonstrators walked down the main roads and the most crowded pedestrian intersection in Shibuya, drawing the attention of ten thousands of people.

“There is change in this country” Sasha said, and “growing awareness.” Excitedly, Abdolmajid informs me that there will actually be “an anti-dolphin-hunting demonstration towards the end of November, organized by the Japanese.”

Further opportunities presented themselves at the “No Fur” rally, the activist said, offering “us the unique opportunity to further network with dolphin lovers, to work together, and support them in the best possible way. We cannot stop the dolphin slaughter in Japan,” said Sasha, “only the Japanese can.” 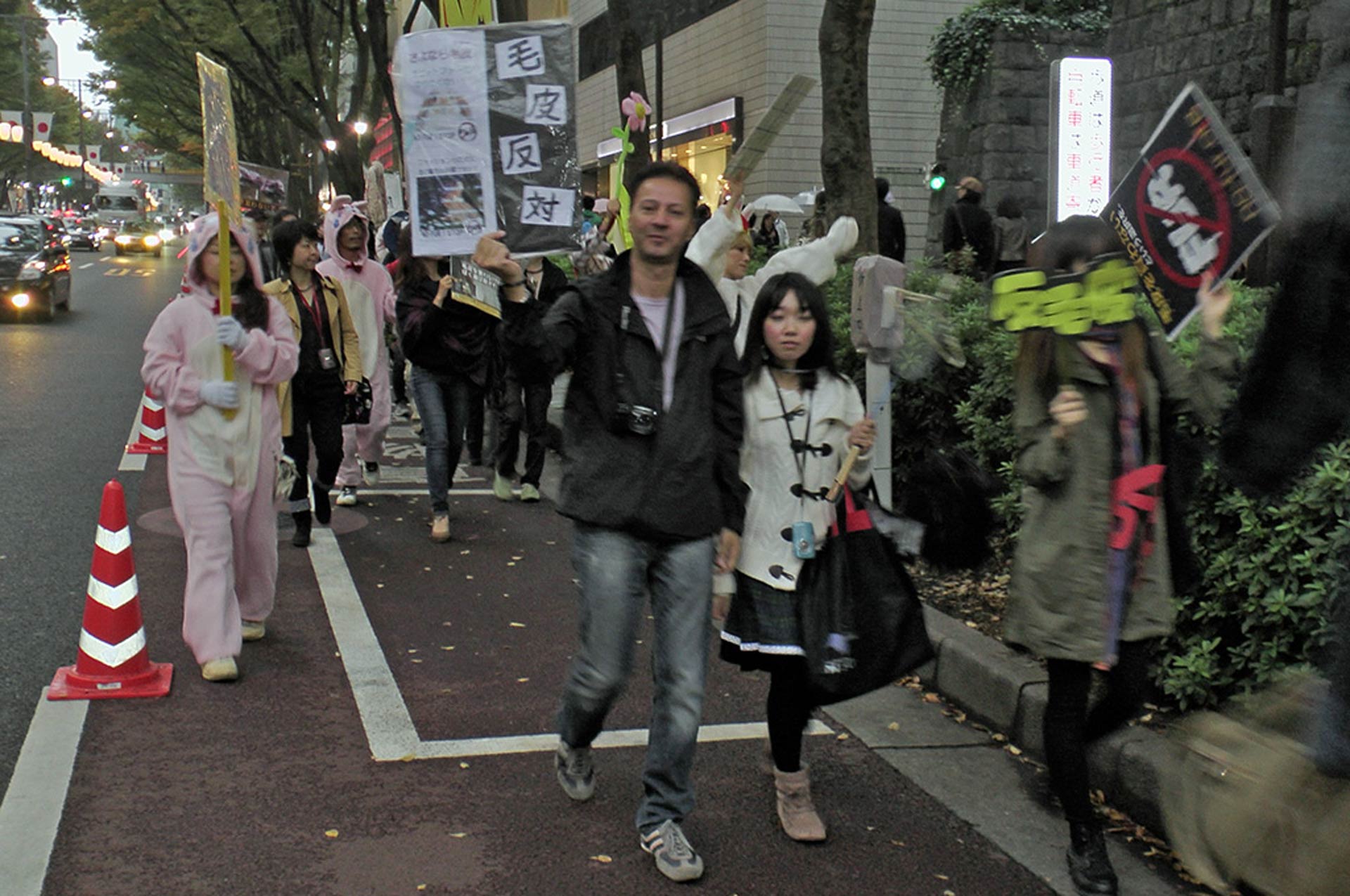 In a final discussion with Toshiaki after the rally, Abdolmajid said that the Japanese activist was surprised when Sasha thanked him for his efforts.

“You do not hate Japan?” Toshiaki asked.

Sasha said he was stunned. “There is no reason not to like a country, just because a small group of people do something terrible.”

Abdolmajid took every opportunity he could to talk to Japanese people about the dolphin drives. There is a Japanese lady in a 7Eleven store in Tokyo said the activist, “who has become passionate about protecting dolphins, just because I happened to meet her, exchange some thoughts in English and talk about Taiji.”

This occurred more than once explained the new activist who described the responses he received as encouraging.

“This definitely makes me want to return to Japan” Sasha said. The entire experience he adds, only left him “with the conviction: I make a difference. You do. Every activist does.”

“There is always ‘Hope’ and ‘Faith'” said Abdolmajid on the Taiji situation, “no problems – just solutions.”