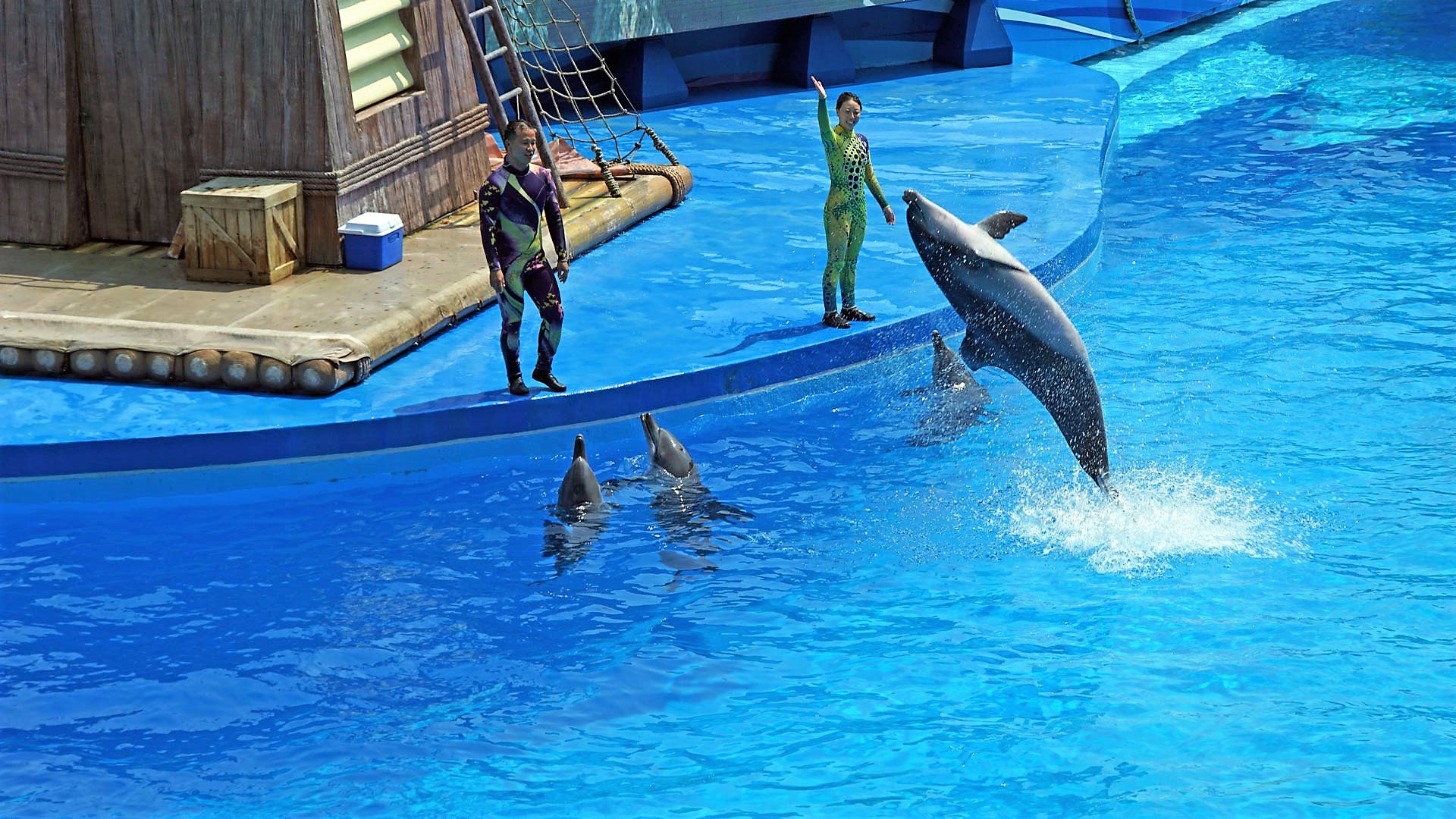 “Captivity kills,” they chant as a group of 50 activists protest at the entrance of Ocean Park, holding aloft a three-metre long model of a dolphin splattered with red paint.

This is Hong Kong’s chapter of international “Empty the Tanks” day – a non-violent demonstration synchronised with conservation groups in 20 countries across the world. It’s part of a movement to end the capture and sale of wild dolphins to marine parks which has gained considerable traction since the release of the 2009 documentary The Cove. The Oscar-winning film drew global attention to the traditional slaughter of the mammals in the Japanese whaling town of Taiji.

A stocky Chinese man pushes to the front of the protest, confronting Ocean Park’s representatives who say they have no plans to end their dolphin shows or their research and breeding projects, regardless of mounting pressure from local and international groups.

“Why don’t you explain to these kids why you’re keeping dolphins in prisons?” the activist shouts, pointing at a group of girls waving placards. He is a member of local group Dolphin Family which has strong ties with activist movements in mainland China.

With its crayon-coloured roller coasters and vast, artificial sea experiences, Hong Kong’s 38-year-old entertainment complex has become a focal point in this region for the increasingly heated debate on whether marine parks and dolphin shows should become a thing of the past.

Twenty one bottlenose Indo-Pacific dolphins circle its tanks, feeding on dead fish and performing for audiences. 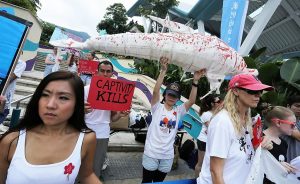 Activists hold a demonstration at Hong Kong’s Ocean Park on ‘Empty the Tanks’ day – a non-violent demonstration synchronised with conservation groups in 20 countries across the world. Photo: Jonathan Wong

These dolphins have been procured on breeding loans from other parks or bred within the confines of Ocean Park’s own tanks overlooking the South China Sea on the lush, tranquil side of frenetic, built-up Hong Kong Island.

The park’s management claims they are kept in good health, have a higher than average survivorship rate, and are given stimulating tasks to perform which mimic behaviour they would engage in if they were living in the wild. They are not forced to do anything they don’t want to, and actually enjoy entertaining appreciative audiences, according to management.

“We believe that our dolphins enjoy and are keen to participate in the shows because it is free will for them whether they do or do not,” says Suzanne Gendron, Executive Director, Zoological Operations & Education of Ocean Park. Concern groups want Ocean Park to phase out its dolphin collection and daily 20-minute shows.

They’re worried the park is not only subjecting its dolphins to unnatural and undesirable experiences, but that it’s sending a misleading message to mainland China that the practice complies with modern day animal welfare principles which take into account the psychological state of the mammals alongside their physiological needs.

As highly intelligent, sociable creatures adapted to living in wide, open waters, bottlenose dolphins are said to have a “home range” of about 300 kilometres. Activists say putting a dolphin in a swimming pool-sized tank may look humane, but it’s the equivalent of confining a human permanently to a bathtub.

Cetaceans are literally bored to death in their tanks, which are always tiny in relation to their size and extremely monotonous for them,

He recently returned to Germany after spending months touring China with fellow activists, hoping to raise awareness about the controversies surrounding marine parks.

Dolphinaria give the false impression to the public that it is okay to keep these highly evolved creatures captive as clowns for entertainment under the pretext of ‘education’, 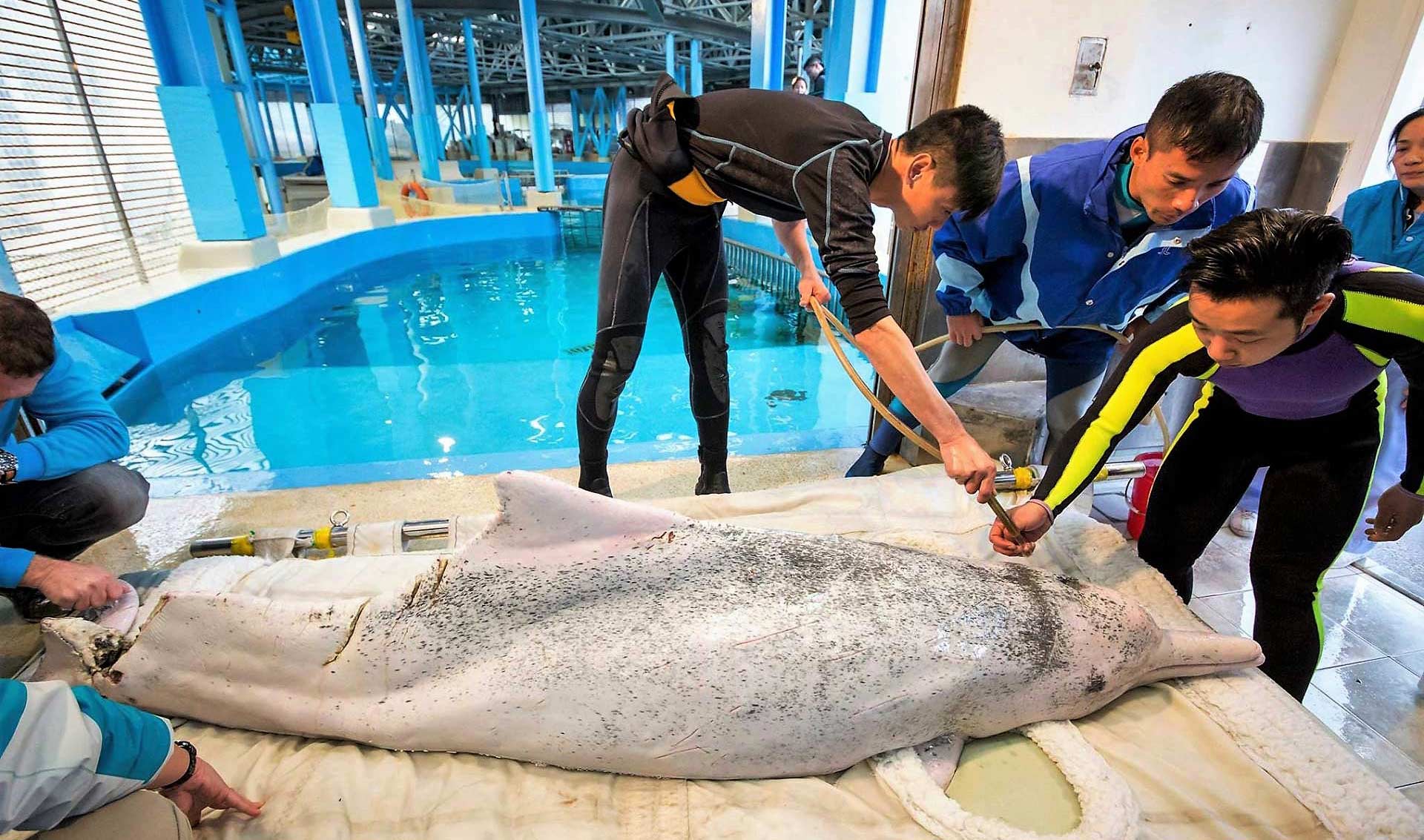 A wild male dolphin named Hope, who was found critically injured in waters off Tai O in February, is given medical treatment at Ocean Park. Hope was later euthanised after his condition worsened. Photo: Ocean Park

Suzette Ackermann, a Hong Kong-based South African independent activist who helped coordinate the city’s Empty the Tank protest, agrees. She visits Taiji twice a year to “stand witness to the killing and kidnapping of dolphins”.

We have to stop the shows – it is not natural or educational for a dolphin to perform tricks for food,

she says. The Empty the Tank movement is campaigning for all dolphin collections and shows to be phased out, breeding programmes stopped, and the remaining dolphins to be retired to a sea pen where they can live out the rest of their days experiencing the natural rhythms of the sea.

“We know they were bred in captivity and can’t survive in the wild,” says Ackermann of Ocean Park’s collection. “But keeping them in tanks is inhumane and cruel.”

The tide is starting to turn against marine parks in the West and even parts of Asia. Switzerland has recently banned the import of dolphins, while the UK, Norway and Croatia are all dolphinarium-free. In 2013, India banned dolphinaria – deciding it was “immoral” to keep such sophisticated animals captive for human entertainment.

China is conversely seeing an upswing in demand for marine parks as the country’s entertainment developers look for new ways to cash in on the ever-diversifying recreational habits of the rising middle class.

China is the largest importer of the Japanese Taiji dolphins.

“There is great demand for live dolphins in China currently, mostly purchased from the cruel dolphin drive hunts in Taiji, Japan,” says Sasha Abdolmajid, a German-based environmentalist who runs a website tracking the dolphin issue. “So China, worldwide the biggest importer of live cetaceans, holds the key to cutting that demand.”

In the last 10 years, the number of marine parks on the mainland has shot up from “just a small handful” to around 50 facilities, says Cathy Williamson of the Whale and Dolphin Society (WDS), a UK-based lobby group that has recently joined forces with the local Hong Kong Dolphin Conservation Society and the Animal Welfare Institute to monitor and investigate the impact of this boom.

We’re seeing the industry decline in the EU and the US with the controversies of [marine theme park chain] SeaWorld. But in China we’re seeing the opposite – it’s a big issue over there,

she says, adding that in the surge to fill more tanks, controversial procurements of wild dolphins will continue rather than be phased out.

There’s a huge public concern; animal welfare standards are low, and the facilities are very much centred around entertainment rather than welfare,

Some 250 dophins captured in the wild have been imported into 25 marine theme parks across China since 2010, according to a report. Photo: Hong Kong Chinese White Dolphin Society

Some 250 dophins captured in the wild have been imported into 25 marine theme parks across China since 2010, the WDS report. Over the same period, more than half of Taiji’s imported dolphins have gone to China, according to a UN report released in June.

The World Association of Zoos and Aquaria (WAZA), an international standard-setting body of which Ocean Park is an accredited member, this year banned the procurement of Taiji dolphins, though it maintains the position that keeping dolphins in captivity serves valid educational and pro-conservation purposes.

The association’s argument: seeing in the flesh a playful dolphin with a permanent smile etched on it is face can connect humans with nature and provide an antidote to the stresses and disharmonies of our increasingly urbane lives, making us want to conserve our ever-degenerating, ever-shrinking natural world.

The rising number of captive dolphins in China, a country with minimal animal protection laws, does not alarm Suzanne Gendron, of Ocean Park – who also sits on a board liaising with mainland facilities and legislators on how to improve the quality of China’s marine parks

She says that while there is room for improvement in many mainland facilities, she is confident that “best care” standards can be met.

“I believe that we are seeing quite a shift in the dolphinaria in China. The ministry of agriculture has made it a mandate and a high priority to set standards for marine mammal care under human care for China,” she says. Ocean Park’s management sits on a board discussing with China’s Ministry of Agriculture how best to bring the country’s marine mammal welfare standards in line with international conventions. 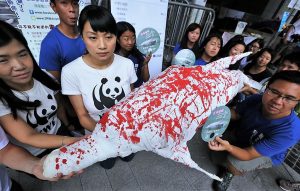 Activists from the World Wildlife Fund, Friends of the Earth and the Hong Kong Dolphin Conservation Society hold up a scale model of a slain dolphin to protest a Hong Kong development project that would encroach upon dolphin habitats. Photo: Felix Wong

Gendron reports their animal behaviour experts are sent on regular trips to the mainland to advise on how new parks can raise their standards.

While Ocean Park prides itself in its role advising those spearheading the push for more marine parks in the region, activists are not impressed by the relationships fostered in this exchange of skills and expertise.

Ocean Park work with dolphinaria in China. They actually have a formal memorandum of agreement signed with some of the aquariums so that they can do better business and also promote their parks to Chinese tourists and I think that’s wrong,

Emotions run high on both sides throughout the protest. Management at Ocean Park – a not-for-profit organisation which takes in stranded dolphins and pays dividends to local wildlife protection projects – insists that it is, at heart, a conservationist establishment.

Back at the entrance, the protest ends with promises of further talks between activists and management, though both sides stick to their guns. And while Ocean Park sees a long future ahead for its dolphin attractions, Hung is hopeful that time will tell a different story.

“The Empty the Tank movement will succeed eventually,” he promises. “So one day Ocean Park will [have its dolphin facilities] shut down, but whether they want to do it by taking the initiative or we force them to do it, it doesn’t matter. But we need to keep applying the pressure to end this.”